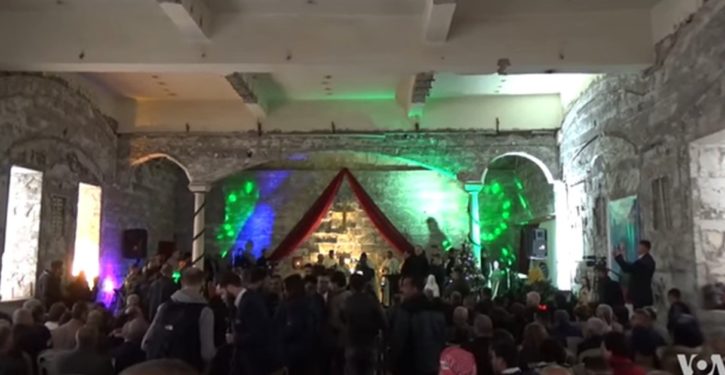 Iraqi Christians in Mosul celebrate Christmas again, after their city was liberated from ISIS in 2017. (Image: Screen grab of VOA video, YouTube)

[Ed. – And Pakistanis, and Syrians, and Indonesians, and Ghanaians… and others in places like Bangladesh, Nigeria, and Gaza where Christians have come under attack for years.]

The western sell out of its own principles and traditions could not be more clear this year as reports out of the Middle East show that Iraqis are exultantly celebrating Christmas as ISIS flees in defeat while at the same time Europe is canceling Christmas and removing holiday decorations to appease the tender sensibilities of their Muslim invaders.

[C]elebrants of the Christmas holiday were seen throughout the Iraqi city of Mosul this year as ISIS finds defeat at every turn. …

Meanwhile, in Europe they are going in the opposite direction. European governments are dismantling Christmas for fear of the terrorism being brought in by the millions of Muslim invaders they have allowed to flood into their countries.

The Italian city of Bolzano, for instance, has canceled their Christmas decorations for fear it might “offend” Muslims.