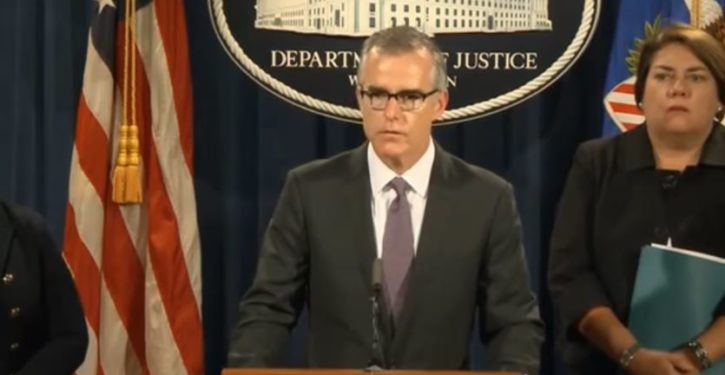 [Ed. – No wonder McCabe plans to retire so suddenly.  That’s pretty definitive.  Might or might not be surprising, depending on your expectations.  But keep in mind: Hillary was not the incumbent of a federal office at the time.  She was a citizen in private life, and should have been treated by the FBI no differently from Donald Trump.  We’re entitled to know what “Hillary getting an HQ special” was about, and how it affected the processing of her case.]

Friday on FNC’s “America’s Newsroom,” Rep. [score]Matt Gaetz[/score] (R-FL) said a congressional committee had evidence FBI Deputy Director Andrew McCabe indicated Hillary Clinton was going to get an “HQ special” regarding the investigation of her unauthorized email server and ties to the Clinton Foundation during her tenure as secretary of state.

Gaetz, a member of the House Judiciary Committee, described the circumstances at the FBI regarding the investigation as “extreme pro-Hillary Clinton bias.” …

“[O]ur view is we need to find out if whether or not the procedures were departed from,” he added. “And we have email evidence from Andrew McCabe indicating that Hillary Clinton was going to get an ‘HQ Special,’ a headquarters special. That meant that the normal processes of the Washington field office weren’t followed…”