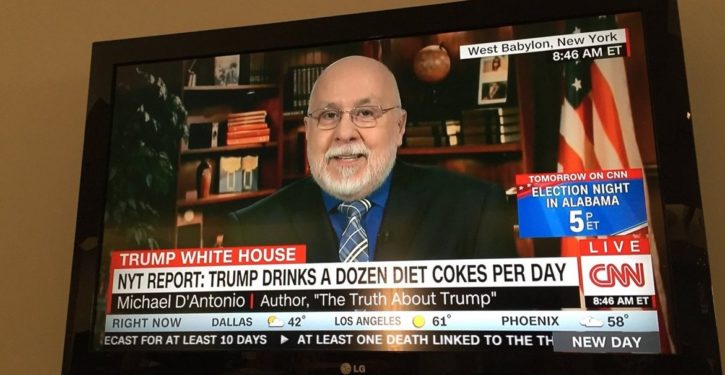 Most certifiable name in news. (Image via Twitter, Max Tani)

[Ed. – It’s like they’re obsessed, you know?  Forget the ISIS terrorist with the pipe bomb menacing thousands of New Yorkers.]

On Monday, Americans awoke to news of an attempted terrorist attack in New York City. Thankfully, nobody was seriously injured in the attack, which was believed to be a failed suicide bombing carried out by someone inspired by ISIS.

But beyond that, CNN had some really pressing news to report: President Donald Trump sure does drink a whole lot of Diet Cokes, eh?

Apparently, a New York Times report suggests that Trump drinks a dozen cans of Diet Coke a day. Which, while this probably makes Trump’s dentist wince a little bit, doesn’t seem to be a matter of national security.

Why did demoted DOJ official’s wife obtain this unusual license when she went to work for Fusion GPS in 2016?
Next Post
Putin takes victory lap in surprise visit to Syria; announces force pull-out