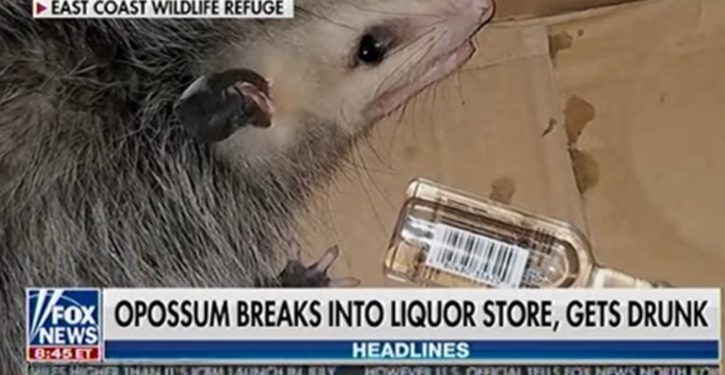 [Ed. – Add opossums to the growing list of party animals.  Unlike the Polish badger, whose tipple was beer, the opossum appears to have gone for the hard stuff.  It is gratifying to know that we have an alerted public that recognizes when an opossum is not acting normal.]

An opossum that apparently drank bourbon after breaking into a Florida liquor store sobered up at a wildlife rescue centre and was released unharmed.

Emerald Coast Wildlife Refuge officials say the opossum was brought in by a Fort Walton Beach, Florida, police officer on Nov. 24. A liquor store employee found the animal next to a broken and empty bottle of bourbon.

“A worker there found the opossum up on a shelf next to a cracked open bottle of liquor with nothing in it,” said Michelle Pettis, a technician at the refuge. “She definitely wasn’t fully acting normal.”