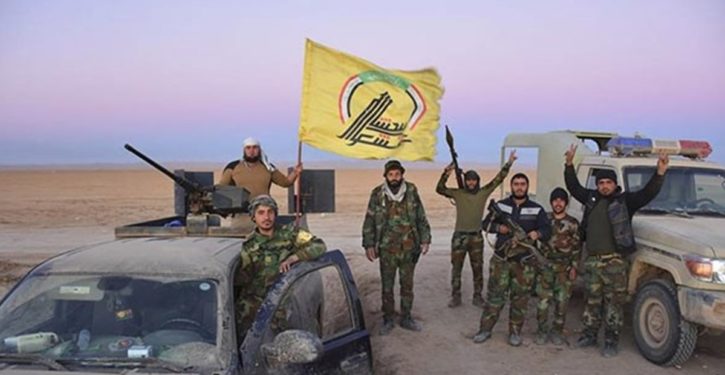 Iran-sponsored militia fighters, assembled at Um Jaris in northwestern Iraq, signal their enthusiasm for kicking out the U.S. from Syria. (Image via Islamic Invitation Turkey)

A component of the Baghdad-sanctioned coalition of mainly Iran-allied Shiite militias in Iraq has threatened to attack U.S. troops if they refuse to leave the country, declaring that the United States “has become our direct enemy.”

The threat came from Abdullatif al-Amidi, the commander of the Saraya al-Ashura faction inside the umbrella organization of mostly Shiite militias loyal to Iran known as al-Hashd al-Shaabi, Arabic for Popular Mobilization Forces/Units (PMF/PMU), reportsKurdistan24. …

During a televised speech on Tuesday, Abdullatif al-Amidi, the commander of the PMF faction Saraya al-Ashura, warned, “The U.S. has become our direct enemy after the Congress’ decision against some Hashd al-Shaabi factions,” reports Kurdistan 24.