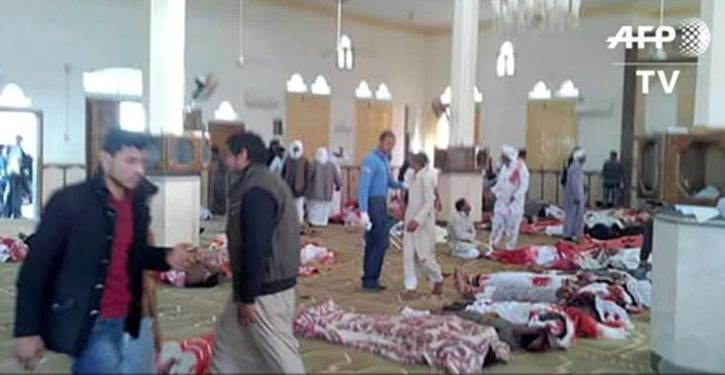 [Ed. – Egypt is increasingly under attack, partly because of the removal in 2013 of radical former president Mohamed Morsi, a Muslim Brotherhood leader who elevated radical Islamists during his short tenure, began imposing sharia law, and advocated openly for an invasion of Israel and seizure of Jerusalem.  Abdel Fattah al-Sisi has tried to steer a moderate course in the face of radical infiltration by ISIS, Al Qaeda, and Iran-backed Shia radicals.  Attacks in Egypt are a major effort in the radical Islamic war on the existing structure of the Middle East.]

At least 235 people were killed and 109 injured Friday when gunmen armed with explosives attacked a Sufi-linked mosque in Egypt’s restive Sinai Peninsula, according to officials quoted by the state media, the deadliest assault in the country’s modern history.

The assailants detonated a bomb at the Al Rawda mosque in the town of Ber al Abd, west of the city of al-Arish, state media said, before opening fire. Several ambulance vehicles were fired upon as they tried to ferry the injured from the scene, state television said.

No group immediately claimed responsibility for the attack. The Egyptian branch of Islamic State regularly stages assaults in Sinai, and is active in al-Arish. A string of terrorist attacks have hit the sparsely populated province since 2013, mostly targeting policemen and army troops. Violence against Coptic Christians also has increased.