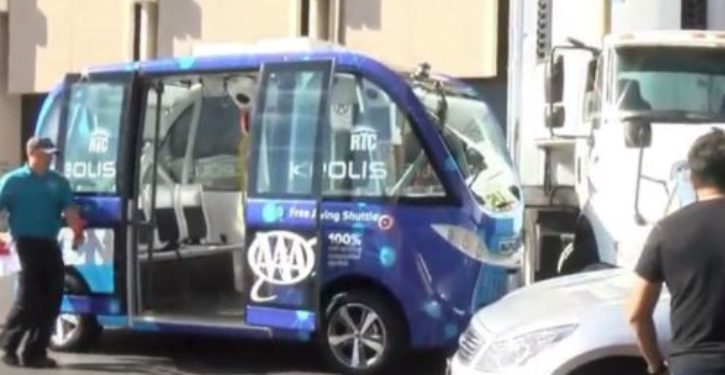 Las Vegas’ self-driving shuttle service marked its return by getting into a minor collision, according to local NBC station KSNV News 3. French startup Navya‘s autonomous electric vehicle shuffles at around 15 MPH on a 0.6 mile circuit in the downtown Fremont East district. But, just an hour into its year-long trial (which follows a successful stint in January) the shuttle was hit by a delivery truck that was backing up.

None of the eight passengers aboard the driverless vehicle suffered injuries and neither did the truck driver. Instead, the front bumper of the shuttle took the brunt of the damage. A spokesperson for AAA, which is sponsoring the latest pilot program, said on Twitter that the accident was due to “human error” on the part of the truck driver.

A representative of the Las Vegas City government also posted a note on its official Tumblr page detailing the accident. “The autonomous shuttle was testing today when it was grazed by a delivery truck downtown,” reads the post.