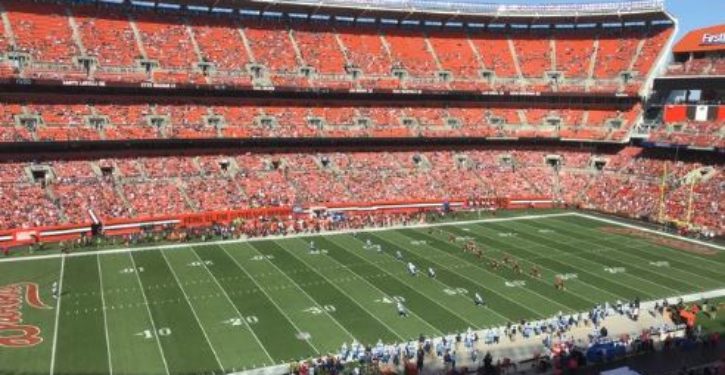 The stadium where the Cleveland Browns play was half-empty on Sunday, and not only because the game featured two last-place teams. (Image via Twitter)

[Ed. – Once they have murdered the sport of professional football and need to find employment in the real world, we’ll see how deeply the protesters convictions about social justice run.]

If the NFL thought Americans would ease the backlash against the league — they were sadly mistaken. Photos of empty stadiums from around the league show how dire a situation kneelers have spurred. Stadiums were nearly empty in Week 6, as well.

Note, that the Jets played New England on Sunday, meaning there should have been a big crowd for that game. The Texans, Atlanta, and Baltimore are also very relevant teams with relatively loyal fan bases. Yet, thousands upon thousands of fans no-showed or didn’t buy tickets for those games.

Just three weeks ago, about 60 percent of both Democrats and Republicans said they viewed the NFL favorably, a daily tracking poll from Morning Consult found. Then President Trump stepped in.

After the president told NFL owners to fire players who kneeled during the national anthem, more and more players did the opposite of what Trump wanted. Now, Trump voters have flipped their allegiances: More than 60 percent view the NFL unfavorably, up from around 30 percent in September. Meanwhile, analysis from The New York Times shows Hillary Clinton voters’ views remain relatively unchanged.