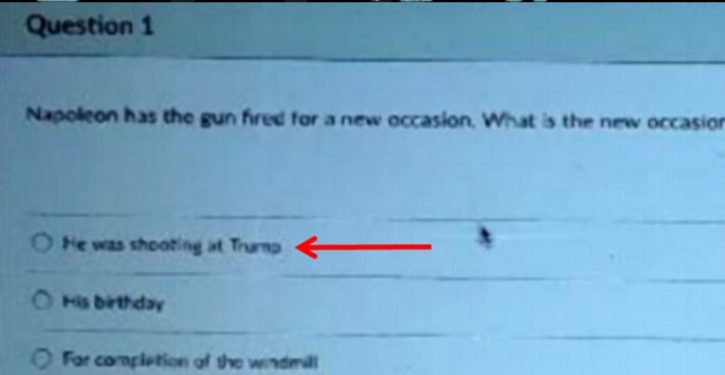 [Ed. – See, the problem here is everyone is jumping to conclusions. The answer doesn’t see which Trump Napoleon had the gun fired at.]

Parents are upset about politics’ pervasiveness in the classroom.

One of the answers a Jackson Hole High School English teacher gave her students on a multiple choice quiz Thursday was “A) He was shooting at Trump.”

Teton County School District No. 1 confirmed the answer was on a quiz administered online by their secure learning management system. The quiz has since been taken down.

Jim McCollum was surprised when his son Rylee McCollum, a junior, came home and showed him a screenshot of the online test.

McCollum, a self-described conservative who voted for President Donald Trump, said that while he “cringes at some of the things he says,” the question was completely out of line.

“It’s about respect for the office more than anything,” he said. “That’s enough of this. No way.”

The test, McCollum said, was on George Orwell’s novel “Animal Farm.” The full question was, “Napoleon has the gun fired for a new occasion. What is the new occasion?”

Clinton: ‘I don’t hate anybody’
Next Post
Hillary Clinton: ‘After all, we have someone admitting to being a sexual assaulter in the Oval Office’