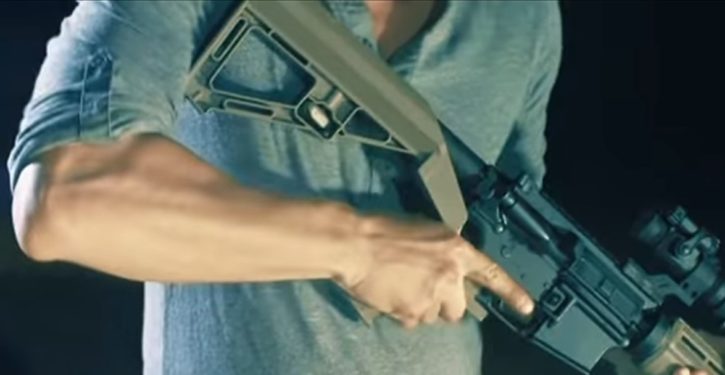 [Ed. – This is even though the NRA wasn’t opposed to a bump stock ban in principle.  It’s the potential for the Feinstein/Curbelo legislation to overreach into other areas that the NRA doesn’t like.  That potential was going to be inevitable with any ban bill, however.  Even manually bump-firing a semiauto WITHOUT the assist from a special device could be argued as non-compliance with the intent of a bill like this.]

The National Rifle Association announced on Wednesday its opposition to a new bill that would ban any firearm part that effectively increases the rate of fire of a semi-automatic rifle.

“We are opposed to the Feinstein and Curbelo legislation,” Jennifer Baker, a spokesperson for the NRA’s Institute for Legislative Action, told the Washington Free Beacon.

The legislation, introduced by Rep. [score]Carlos Curbelo[/score] (R., Fla.) and cosponsored by 10 representatives from each party, is intended to be a response to the Las Vegas shooting, where a number of the rifles found at the scene were equipped with bump fire stocks. The text of the bill goes beyond banning bump fire stocks, however. Instead, in addition to banning bump fire stocks and requiring their surrendering or confiscation, it bans and requires the surrendering or confiscation of any part that increases how quickly a semi-automatic rifle can be fired.