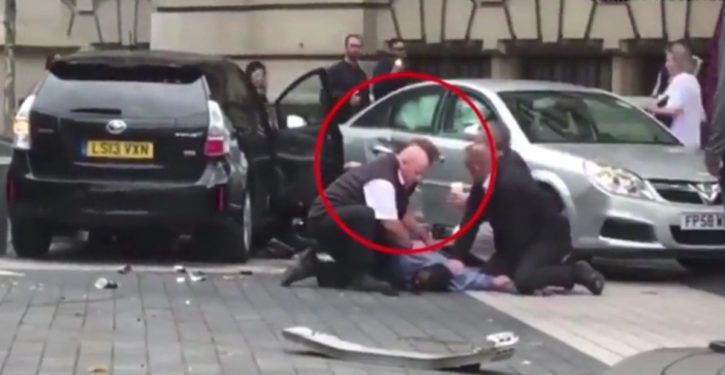 Security guards pin down driver after London vehicle attack. The driver's car is on the left. (Image: Screen grab of Twitter video via Daily Mail)

[Ed. – The Guardian also says police are saying “not terror,” but reporting does suggest it was a deliberate attack. Security guards were video’ed restraining the driver on the ground.]

Police have tonight ruled out terrorism and have described the crash as a ‘road traffic incident’. The driver is still being held in custody.

It comes as the country’s current terror threat level stands at severe following a string of attacks this year and many witnesses feared the worst as panic ensued following the crash.

[T]he cab driver had three female passengers in his car at the time of the crash.

[A witness] said: ‘He was driving down the pavement and hit 11 to 12 people. Then the guy was screaming. He looked at me and I was really in shock.  I got out of my car and grabbed him — three of us grabbed him — and someone phoned the police.

‘The girls in his car said he was an Uber driver.’

Counter-terrorism officers were dispatched to the scene which has been cordoned off following the crash.

U.S. visitors to Cuba now report physical debilitation symptoms similar to diplomats’
Next Post
Bill Maher explains why only white people get away with gun violence