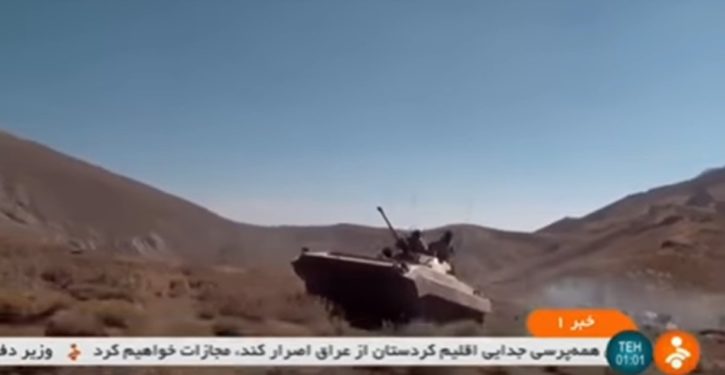 [Ed. – Basically, the timing for everything is bad right now.  There might have been a better time for a Kurdish independence vote, but it was only likely to happen when — after 8 years of Obama — the whole region was in such flux that the Kurds perceived a real opportunity.  This is what you get when you designate your own country as the biggest problem, and stop shoring up the status quo.]

Iran deployed a dozen tanks supported by artillery at its border with Iraq’s autonomous Kurdish region on Monday, a Kurdish official said, adding that the move was a dangerous escalation in the crisis triggered by Iraqi Kurdistan’s independence vote.

“The tanks can be seen from the Kurdish side,” an official from the Kurdistan Regional Government (KRG) security council told Reuters, adding that the move was a “dangerous escalation.”

Iraq’s Kurds overwhelmingly voted for independence in a referendum held one week ago, defying the central government in Baghdad as well as neighboring Turkey and Iran, which fear Kurdish separatism within their own borders.

The deployment at the Parviz Khan border point on Monday was part of joint military drills conducted by the Iranian and the Iraqi armed forces in response to the referendum, state media in Tehran said.