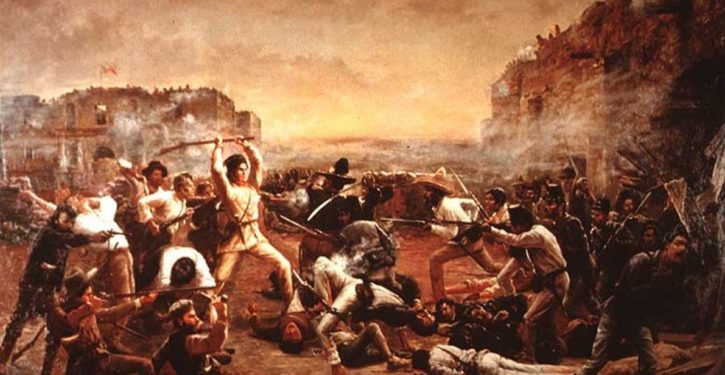 [Ed. – I regret to put before you George P. Bush, and his commission’s plan to “reimagine the Alamo.”  Just when it seems like things can’t get more insane.  The 106.3 article has contact info for state leaders if you’re a Texian who won’t take this lying down.]

There is a plan to change the Alamo, even renaming it, and ultimately attempt to erase the Battle of the Alamo as the defining moment in the Franciscan mission’s existence. The ‘Save The Alamo’ campaign has been launched to help preserve the history of the Alamo. Rick Range, a Dallas-area Alamo Historian and founder of Save The Alamo committee, discovered what is believed to be one of the cannons used in the Battle of the Alamo stored in a barn in North Texas. Range is sounding the alarm over what will ultimately be the descecration of one of Texas, and America’s, most sacred sites.

‘Reimagine the Alamo’ certainly appears to be nothing more than another attempt at erasing our history and our heritage in the name of political correctness. George P. Bush, the current Texas Land Commissioner, is pushing this plan to destroy the Alamo as we know it. Part of this plan includes the removal of the Alamo Memorial, the Cenotaph, which has stood in Alamo Plaza since the 1936 centennial, to a site blocks away.