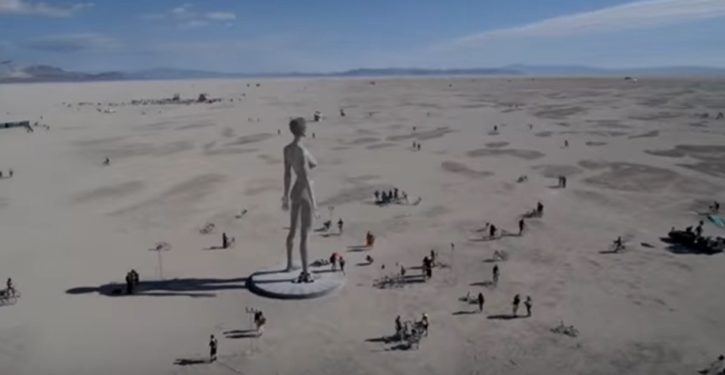 A 48-foot version of the Cochrane nude is assembled at Burning Man in 2015. (Image: Screen grab of Bliss Project video, YouTube)

[Ed. – The artist’s concept is to show the fearlessness women would have if they weren’t under threat all the time.  So odd that that requires a near 10 x life-size nude.  I actually think visitors and locals alike might be more effectively inspired by a different display: say, a 45-foot replica of the “Pioneer Woman” in Ponca City, Oklahoma.  Another possibility: the statue of Pocahontas in historic Jamestowne, Virginia.]

If you walk along the National Mall this November, you’ll see the Smithsonian Museums, the Washington Monument, Capitol Hill, and, possibly, something else: a 45-foot tall nude sculpture of a woman.

The Amazonian figure would tower over the National Mall next to the Washington Monument, directly facing the White House until March 28 to promote women’s equality.

Organizers are trying to raise funds to transport the R-Evolution sculpture from San Francisco to Washington. They’ve gotten approval from the National Park Service to have the structure on the grounds of the National Mall. …

The sculpture was created by artist Marco Cochrane as part of The Bliss Project. He said the sculpture was meant to combat a culture that increasingly dehumanizes women and sexualizes the female form.