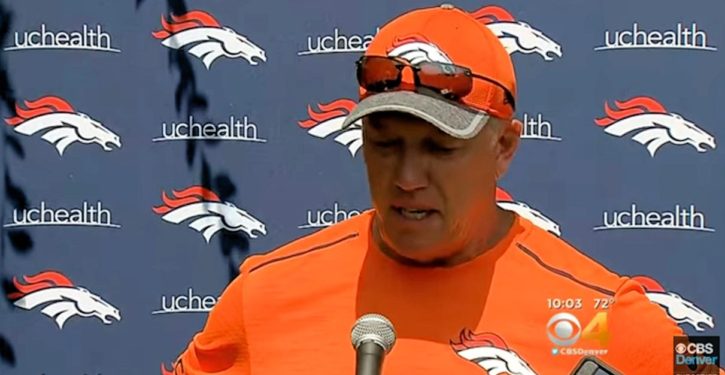 [Ed. – A lot of the NFL emeritus players are weighing in on this.  The Patriots’ Burgess Owens has been on Fox this week urging NFL players to use their wealth and influence to help black communities, rather than protesting the symbols of America.]

John Elway, a two-time Super Bowl quarterback champion and now the vice president of operations for the Denver Broncos, issued a statement about the NFL protests saying that it’s time to “take the politics out of football,” and that he is “one that believes in standing for the National Anthem” and that he also believes America “is the greatest country in the world.”

“I’m one that believes in standing for the National Anthem, and I’ve always believed that,” said Elway in the statement, which he tweeted on Sept. 26. “I believe this is the greatest country in the world.” …

“Hopefully as we go forward we can start concentrating on football a little bit more,” said Elway.

“Take the politics out of football,” he said.