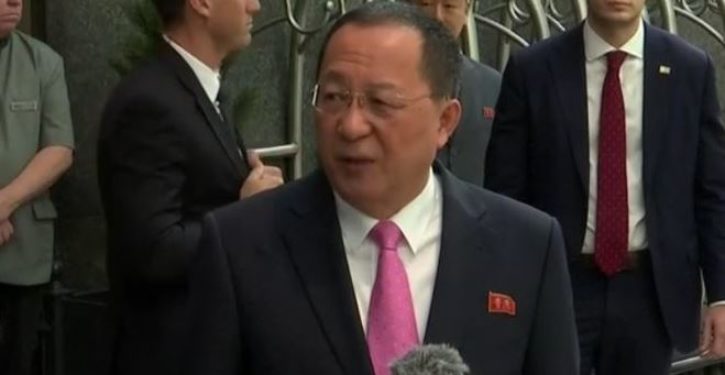 [Ed. – The Norks flex their muscles daily with one missile launch after another, and they’re accusing the U.S. of declaring war?]

North Korea’s foreign minister has accused US President Donald Trump of declaring war on his country and said Pyongyang had the right to shoot down US bombers.

Ri Yong-ho said this could apply even if the warplanes were not in North Korea’s airspace.

In response, the Pentagon warned Pyongyang to stop provocations.

Meanwhile, the UN chief has warned that the fiery talk could lead to misunderstandings.

Mr Ri’s comments were a response to Mr Trump’s tweet that Mr Ri and North Korean leader Kim Jong-un would not “be around much longer” if they continued their rhetoric.

“The whole world should clearly remember it was the US who first declared war on our country,” Mr Ri told reporters as he was leaving New York, where he had addressed the UN General Assembly on Saturday.

“Since the United States declared war on our country, we will have every right to make counter-measures, including the right to shoot down United States strategic bombers even when they are not inside the airspace border of our country.”