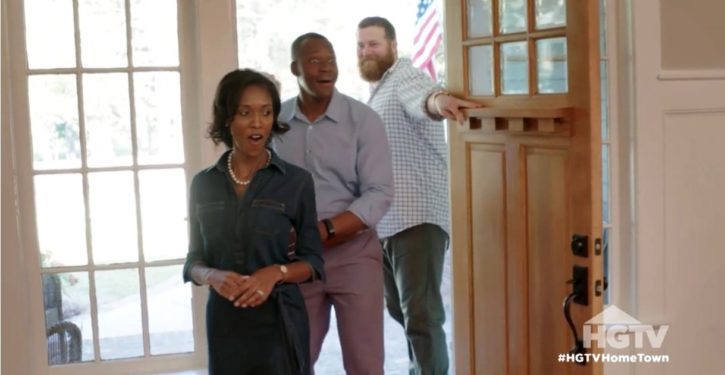 [Ed. – Mindsets I could never understand include this one.  Seriously, why grouse about people enjoying home-flipping and remodeling shows?  At least remodeling and fixer-uppering are things people actually do in real life — unlike the demented premises of a lot of reality TV shows out there, which God bless ’em, nevertheless.  All y’all do you, OK?]

Who could get a divorce in a house with so many lush towels rolled up in the master bathroom? Who could raise a sullen teen when there is a “great room” where the family can gather for nachos and football on the big screen?

We are supposed to be in rehab from our housing binge of ten years ago, the one that nearly bankrupted the country. We are supposed to be in a state of contrition. But our national love of HGTV suggests that the dream won’t die. The longing it addresses is impervious to market corrections, or personal financial realities, and as economists continue to explore the true causes of the 2008 financial crisis, they are beginning to suspect that some speculative Americans acting on that longing got us into that mess as much as — or more than — unscrupulous bankers or Wall Street. In fact, the network may now be tempting its millions of fans to dip their toes back into the most dangerous waters of the past crisis: flipping. …

But just as the mild stimulant of Decorating Cents made way for the Adderall of House Hunters, so did the latter prepare viewer and network for the speedball of flipping, which is now the core of the network’s most successful shows and which may be the most dangerous part of a national obsession that has caused us all great grief in the past and possibly even spurred that global financial crisis. It all began with Property Brothers.