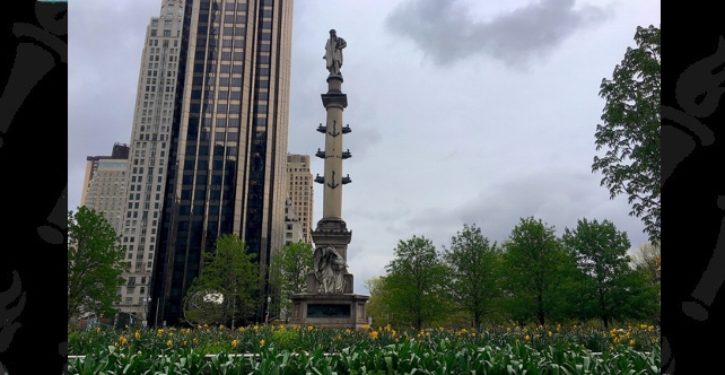 Following multiple acts of vandalism on Christopher Columbus statues since August, a militant antifa group has announced “Deface Columbus Day” on Oct. 9 as a coordinated campaign to deface and destroy more historical monuments.

In Yonkers, New York, a Columbus statue was beheaded on Aug. 30. Antifa vandals were also responsible for the destruction of the oldest Christopher Columbus monument in the nation on Aug. 21. Vandals left the messages “Racism: Tear it down” and “The future is racial and economic justice.”

On Sept. 20, a New York City-based antifa organization calling itself Revolutionary Abolitionist Movement put out a press release on far-left extremist websites like It’s Going Down to call on their comrades elsewhere in the United States to take action and “decorate” their neighborhoods and parks. The group published a promotional video for the event.

The call from Revolutionary Abolitionist Movement for more vandalism follows “woke” outrage against the Renaissance-period explorer whose discovery of the Americas initiated immigration to the New World. As The Daily Caller previously reported, the New York-based evolutionary Abolitionist Movement currently hosts anti-police workshops in the city for antifa members, with calls for violence against the police, armed insurrection and other revolutionary actions.

McCain, a ‘no’ on Graham-Cassidy, still longs for ‘bipartisan’ health bill
Next Post
Voter confidence in U.S. as world’s most powerful nation rises