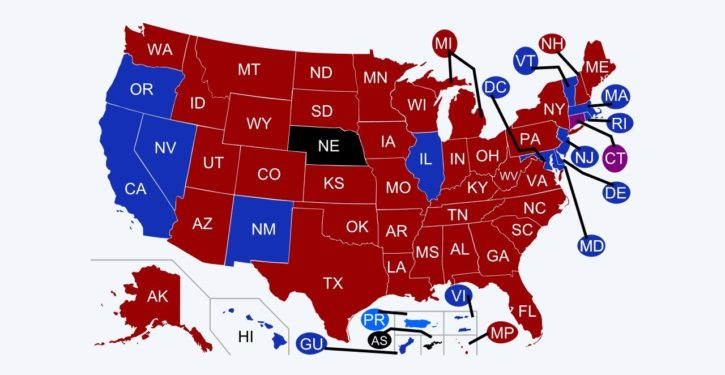 [Ed. – That Democrat-run states would be worse about this is no surprise.  But the size of the difference from GOP-run states is astounding.  It’s also fascinating that in states with divided governments, unfunded debt seems to run about 6-7 times that of all-Republican states.  So divided power doesn’t help that much; it only holds the overspending down, while slowly corrupting fiscal responsibility.  Very much like the old consensus of so-called “moderate” politics in the latter half of the 20th century.]

The nonprofit group Truth in Accounting published “Financial State of the States,” which analyzes the public finances of all 50 states. The group found that state governments have accumulated $1.5 trillion in long-term debt nationwide, mostly due to unfunded employee pension and retiree health benefits.

In general, the fiscal picture is far worse in blue states. The average unfunded debt per taxpayer is $22,214 in the states that have Democratic governors and Democratic majorities in both legislative houses. That compares with an average taxpayer burden of $1,814 in states with a so-called Republican “trifecta.” …

Truth in Accounting calculates that the Garden State owes $208.9 billion in unfunded debts, for a burden of $67,200 per taxpayer. …

Time’s brutal close-up of a ‘shrinking and regional’ Democratic Party
Next Post
Outrage: Preview of Theresa May’s Brexit plan seems to tack on 2 years to 2019 exit