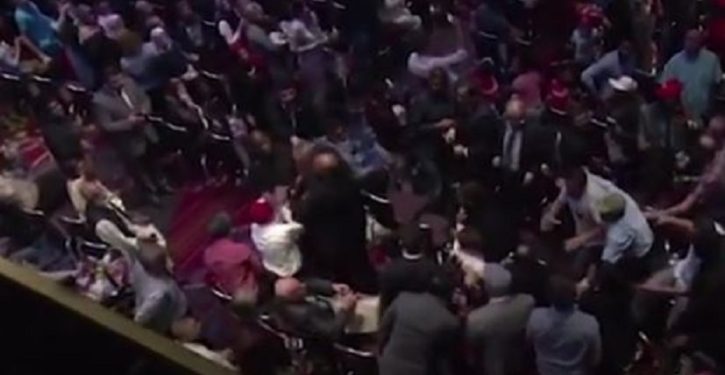 [Ed. – Pushing and shoving escalated rapidly into punches being thrown.]

Violence broke out at a New York hotel Thursday afternoon when protesters disrupted a speech by President Recep Tayyip Erdogan of Turkey.

In the middle of Mr. Erdogan’s speech, delivered in Turkish, a man — one of a handful of protesters — screamed in English: “You’re a terrorist. Get out of my country!” The ballroom at the Marriott Marquis hotel in Times Square instantly erupted, with many attendees chanting Mr. Erdogan’s name to drown out the protesters.

Videos showed the protesters — one of them wearing a T-shirt emblazoned with a picture of Michael Israel, an American who was killed in a Turkish airstrike while volunteering with the Kurdish People’s Protection Units, or Y.P.G. — being punched and slapped by several attendees as security personnel removed them from the room. Security also removed at least one person who had assaulted the protesters.

Meghan Bodette, who identified herself as one of six protesters (one of whom was filming), said their goal was “to call attention to the Turkish state’s war crimes and human rights abuses against the Kurdish people,” both in Turkey and in Syria.

Zuckerberg zinged by Left and Right after vowing to protect U.S. elections from outsiders
Next Post
Political correctness will be the death of comedy warns 91-year-old funnyman Mel Brooks