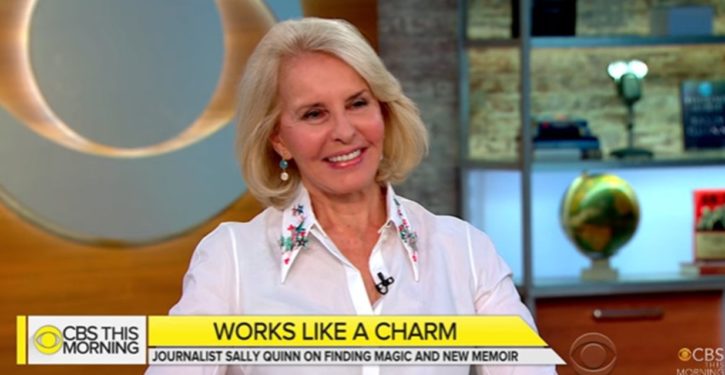 [Ed. – Quinn is the surviving third wife of Ben Bradlee — longtime editor of the Washington Post — who died in 2014.]

A longtime Washington socialite is raising eyebrows with her new book on spirituality as she claims the hexes she put on three people in the past may have led to their deaths.

Sally Quinn – a journalist who was famously married to Washington Post editor Ben Bradlee – admits to being an Occultist in her new “spiritual memoir” titled Finding Magic.

Quinn says she feels guilty about her hexes and won’t do them anymore. She also says she refuses to cast a spell on President Trump as some of her friends have asked.

“Believe me, since Trump was elected, and since the election, I can’t tell you how many friends have asked me to put a hex on Donald Trump, and I won’t do it,” Quinn said in a book interview with USA Today. “I just said no. I don’t do that anymore.”

Quinn also claims all the women in her family are psychic. She said her mother also put hexes on two people who died.