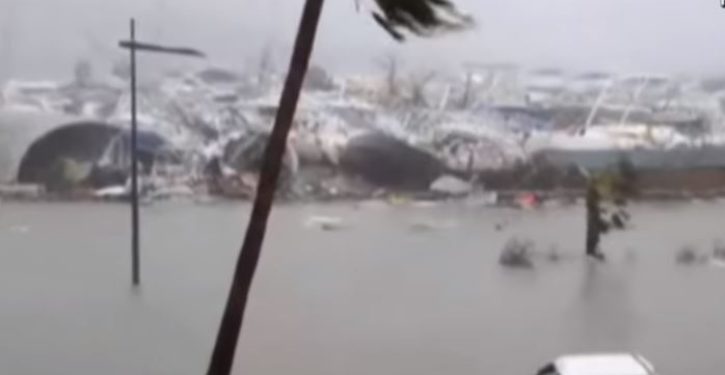 Irma has already made its presence felt in the Caribbean. (Image: YouTube screen grab via NBC News)

[Ed. – Bring on the ritual human sacrifice and shamanism.  Empirical reason is so last-millennium.]

[C]limate scientist…Judith Curry…[a] retired Georgia Tech professor…argued on her Climate Etc. website that Irma, which hit Florida as a Category 4 hurricane on Saturday, was fueled in large part by “very weak” wind shear and that the hurricane intensified despite Atlantic Ocean temperatures that weren’t unusually warm.

That is the kind of talk that could get policymakers who heed her research hauled before the justice system, if some of those in the climate change movement have their way.

“Climate change denial should be a crime,” declared the Sept. 1 headline in the Outline. Mark Hertsgaard argued in a Sept. 7 article in the Nation, titled “Climate Denialism Is Literally Killing Us,” that “murder is murder” and “we should punish it as such.”

The suggestion that those who run afoul of the climate change consensus, in particular government officials, should face charges comes with temperatures flaring over the link between hurricanes and greenhouse gas emissions.