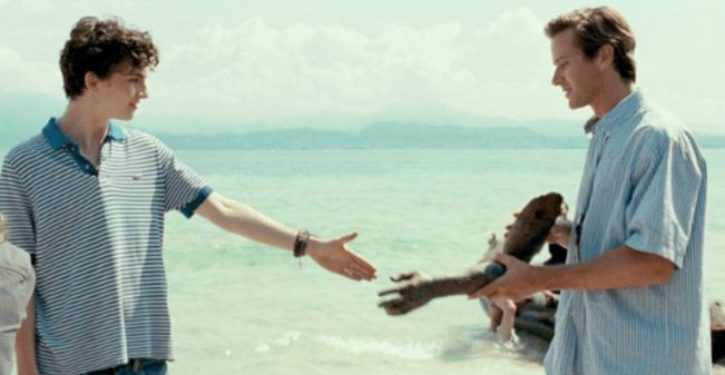 From 'Call Me By Your Name' (Image: Showbiz411 video screen grab)

[Ed. – Philip Roth could not be reached for comment. (Possible spoiler alert: One assumes it’s the Jewish guy who gets intimate with a piece of summer fruit.]

Luca Guadagnino’s “Call Me By Your Name” might become known as “Brokeback Biscotti” or “Peachtree Mountain.” But this sensitively told gay love story set in Italy in 1983 has been a huge hit tonight as one of the opening night films of the Toronto Film Festival. It may also cause a stir because one of the characters has sex with a peach. Superior acting, especially from Michael Stuhlbarg as the most understanding and insightful parent in history. A beautiful hit. [Emphasis added]

Even though it’s set in 1983, “Call Me By Your Name” is going to resonate in 2017 with a lot of different people — but most likely young people in this new environment where it’s okay to be whomever you want. Michael Stuhlbarg is American and Jewish, and a professor of archeology who lives in Northern Italy with his Italian-French wife and son Elio (Chalamet) in a ramshackle country home. Into this comes a new assistant from the US, Oliver (Hammer), who’s like a shining Robert Redford-ish matinee idol.

Maxine Waters on alt-Right: ‘You see how much they want to kill me’
Next Post
Donald Trump is the first white president