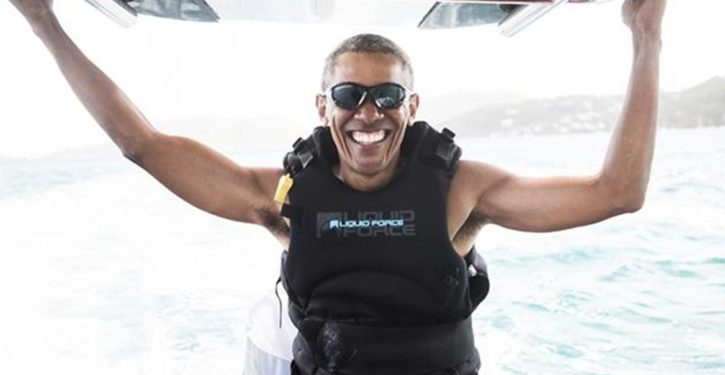 [Ed. – Couldn’t they have just gone to Disneyland?  Incidentally, Jakarta, Indonesia was hardly a “sleepy capital” in the late 1960s.  That was the period of the volatile Sukarno-Suharto transition when Jakarta was anything but sleepy.]

Barack Obama has kicked off a 10-day family holiday in Indonesia that will take in Bali and Jakarta, the city where he spent part of his childhood, officials said on Saturday (June 24).

The casually dressed former president arrived in the resort island of Bali with his wife Michelle and their two daughters, a local military commander said.

“They arrived late last night and went straight to the hotel in Ubud,” a local military commander, I Gede Widiyana, told AFP.

Obama woke up early and did some exercise in the lush green riverside resort, Widiyana said, but it was not known how the family would spend their time in the quiet and artsy Ubud area. …

Obama spent four years until 1970 as a boy in the then sleepy capital of Indonesia after his divorced mother married an Indonesian.