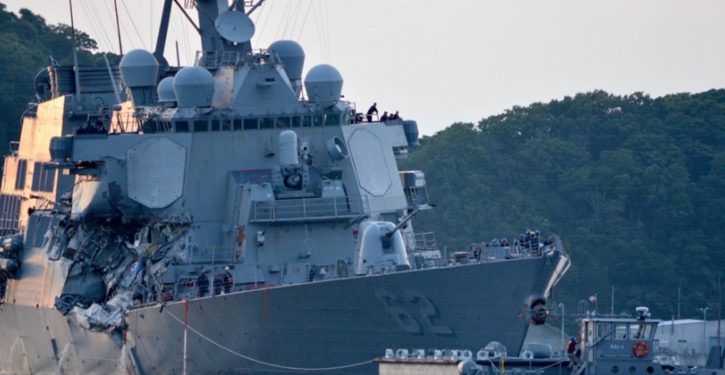 [Ed. – Could have spared the trouble of extensive analysis, perhaps.  Frankly, the emerging conclusions on this still sound unlikely and startling — how in the world did Fitzgerald manage to miss the container ship? — but having the time of collision corrected to 1:30 AM on 17 June makes some other things fall into place.  One that doesn’t is how ACX Crystal got the bow angle on Fitzgerald that she apparently did.  That makes no sense, if it was purely accidental.  Interesting that the officials are apparently not discounting the possibility that the ACX Crystal‘s automated system was hacked.  If they’re still considering that, there’s more than a mile left to go to put this to bed.]

The deadly collision between a U.S. destroyer and a container ship June 17 took place while the freighter was on autopilot, according to Navy officials.

The Philippines-flagged cargo ship ACX Crystal was under control of a computerized navigation system that was steering and guiding the container vessel, according to officials familiar with preliminary results of an ongoing Navy investigation.

Investigators so far found no evidence the collision was deliberate.

Nevertheless, an accident during computerized navigation raises the possibility the container ship’s computer system could have been hacked and the ship deliberately steered into the USS Fitzgerald, an Arleigh Burke-class guided missile destroyer.

Soros links all over DOJ leaker trying to undermine Trump voting-integrity policy
Next Post
Um…Western tech firms have been sharing source code, other cyber secrets with Russia since 2014