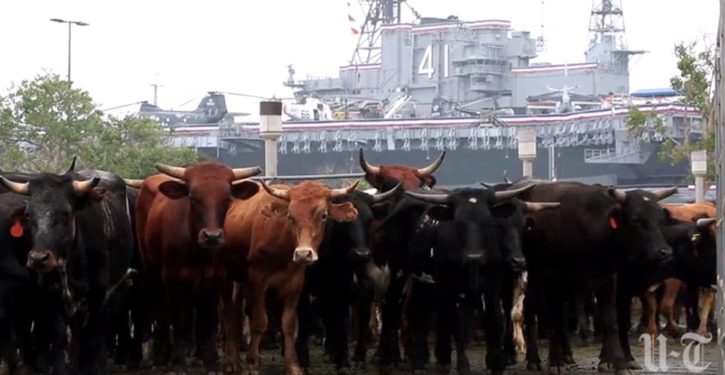 [Ed. – They’re calling it a cattle drive, but it sounds more like a cattle parade.]

Just after 7:30 a.m., a herd of 200 American Longhorn and Mexican Corriente cattle began making its way down Harbor Drive under the guidance of 48 cowpokes on horseback and a small but fast-moving fleet of herding dogs. The cattle drive, said to be first in 100 years in downtown San Diego, was organized by the San Diego County Fair, which opened its annual run Friday with a “Where the West is Fun” theme.

Thousands of delighted spectators lined the 2½-mile route, which began at Harbor Drive and Pacific Coast Highway. Moving at a rate of 3 to 4 mph, the cattle drive moved southeast past the San Diego Convention Center, then turned north on Fifth Avenue and west on Market Street before returning to its staging ground in Ruocco Park near Seaport Village. …

Fortunately, the 45-minute drive came off mostly without a hitch. Early on, a cattle dog took off in the wrong direction down Harbor, but a woman on horseback brought him back. Then as the herd moved under the Gaslamp Quarter monument sign on Fifth Avenue, some cows got spooked and began turning in circles. Finally near the end of the drive as the cattle prepared to cross the San Diego Trolley tracks from Market to Harbor, the trolley crossing gates unexpectedly came down in their path causing some fear and confusion before they were routed around and under the obstacle and carried on.

Will climate alarmists ever start walking the walk?
Next Post
London: Van hits pedestrians in ‘major incident’ on London Bridge