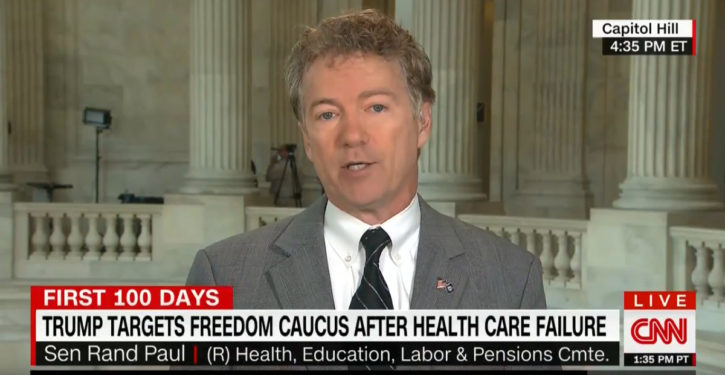 [Ed. – It’s a legitimate question at this point.  Trump did.  Why not other Republicans, such as Ted Cruz, Marco Rubio, and Jeb Bush?  Paul’s question is a way to push this along and not just let it be a generic issue that somebody gets to when he gets to it.  The targets of surveillance have the first right to know.]

Sen. [score]Rand Paul[/score] (R-Ky.) says he has asked the intelligence community and White House for any evidence that he was surveilled by former President Barack Obama.

“I have formally requested from the WH and the Intel Committees info on whether I was surveilled by Obama admin and or the Intel community!” Paul tweeted Friday.

The tweet appears to build off of President Trump’s claim, presented without evidence, that the Obama administration wiretapped Trump Tower during last year’s presidential race. …

Paul tweeted about his request for information in the context of both Trump’s allegations of deliberate surveillance and a recent NSA report stating that the NSA abided by nearly 2,000 requests to unmask names in 2016.