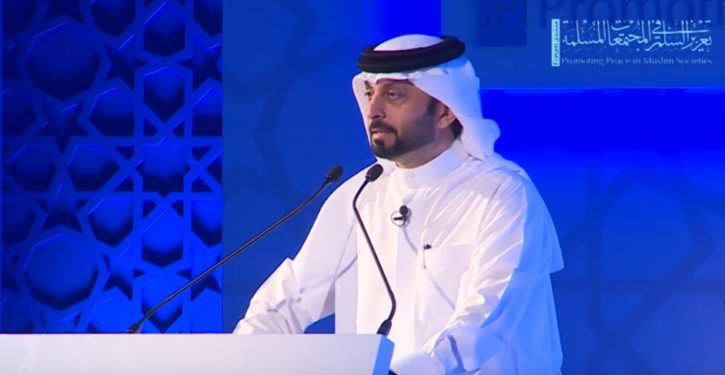 In the cities of Tawra and Alexandria, Muslim terrorists stormed Coptic churches where they proceeded to blow themselves to a fine pink mist while taking 44 worshipers with them. These two attacks followed last December’s horrific suicide bombing at St. Peter’s Cathedral in Cairo that killed 29.

Does Egypt have a problem with Islamic violence? Not according to Egypt’s most prominent clergyman, Dr. Ahmed al-Tayeb, who holds the prestigious title of Grand Imam of al-Azhar. At a conference in Cairo last month, al-Tayeb said that the incidence of Muslim violence around the world is rather unremarkable: “There is an obvious double standard in the world’s judgment of Islam on the one hand, and [its judgment of] Christianity and Judaism on the other, despite the fact that all are guilty of one and the same thing, that is, religious violence and terrorism.”

The point al-Tayeb is trying to make is pretty straightforward: that people are quick to chide Muslims for terrorism when in fact the terror problem cuts across religious lines. Clearly all of this talk about terrorism must be a cloak for bigotry. If people were truly concerned with eradicating terrorism, they would condemn it wherever it’s found. The fact that they don’t exposes their hypocrisy.

Christian and Jewish violence is a cool and casual matter for the West, which never besmirches the image of these two religions. Only their third brother [Islam] stands trial alone on the dock, where his image is constantly marred.

Here the imam skillfully employs the language of familial ties, comparing the Abrahamic religions to three brothers. One of these brothers is singled out for scorn although he is no more guilty than the others. Clearly, that brother has been unjustly maligned.

Unfortunately, al-Tayeb is not easily dismissed as a crank. As the Grand Imam of al-Azhar he commands respect in Egypt and throughout the Muslim world. When he speaks, people listen.

In order to bolster his claim that all religions are equally guilty of terrorism, he cited a few examples — the 1980s abortion clinic bomber Michael Bray, cult leader David Koresh, and the Oklahoma City bomber, Timothy McVeigh. Besides the fact that abortion clinic bombings are very, very rare (al-Tayeb reached back a full 32 years to find one), that Koresh was not actually a terrorist, and that McVeigh was a political terrorist and a very lapsed Catholic, his comparison is on solid footing. OK, not really.

The “double standard” accusation is a serious one that was likely intended to disarm Westerners who are notoriously sensitive about treating others with bias. But is there really a double standard in the way we perceive Muslim violence compared to other kinds? Yes, there is — just not in the way that the Grand Imam suggests. Each time a Muslim terror attack occurs, journalists attempt to lead the public through what can only be called a coping ritual. The ritual has four stages.

The first of these is the “let’s not jump to conclusions” stage in which reporters take great pains not to assume that the attacker is a Muslim just because his name happens to be Abdul or Muhammad or even because he yelled “Allahu Akbar” moments before his killing spree began. (In describing the actions of a Muslim killer in Fresno yesterday, the Associated Press couldn’t even bring itself to admit the lunatic screamed “Allahu Akbar” as he pulled the trigger, instead translating the Arabic chant into the more ecumenical, innocuous-sounding “God is great.”)

Then, when it turns out that the attacker is a Muslim, reporters wonder if his religious affiliation might have been incidental to the attack — which it rarely ever is.

In the second stage, the shortest of the four, reporters actually acknowledge the attack and its motive before quickly moving on to the third stage. I’ll call this the “Muslims fear backlash” stage, and it’s characterized by stories about hijab-snatchings (that usually turn out to be hoaxes) or Muslims getting dirty looks in the street. It isn’t even necessary to find any actual incidents of backlash after an attack because the fear of a backlash, not the backlash itself, is the real story.

The fourth and final stage is when reporters begin to ask how the right-wing might “exploit” the story. This serves as a warning that taking action to stave off civilizational demise is somehow letting the terrorists win.

So yes, there’s a double standard. No other kind of terrorist attack is reported this way.

But that’s not what Ahmed al-Tayeb meant by a “double standard.” What he meant was that Muslims, Christians, and Jews commit proportional amounts of terrorism, but Westerners seem only to notice or care about the Muslim variety. This is a truly extraordinary theory and one that I have often tried to test. Every time there is a Muslim terrorist attack anywhere in the world — and they’re happening now at a rate of several per month — I ask myself if there were other attacks committed in the name of other faiths that the media failed to report or I failed to notice.

Let’s start with the Palm Sunday attacks in Egypt. Have there been any comparable attacks carried out by Christians against mosques? Nope. Muslims blow up Coptic churches but Copts don’t blow up mosques. That’s not a thing.

That doesn’t mean that mosques are never attacked, though it is very rare. The only one that I could find occurred this January not in Egypt but in Canada. The alleged perpetrator, Alexandre Bissonnette, appears to be an anti-immigrant nationalist and a fan of Donald Trump and Marine Le Pen but not particularly religious.

To be sure, the Canadian mosque attack was terrorism, but it was also anomalous and not religiously inspired. There is no equivalence between Bissonnette and the suicide bombers who attacked two churches on Palm Sunday, and even if there were it wouldn’t begin to balance out the countless other terror attacks that have occurred in recent weeks. In the past thirty days a Muslim attacked the Palace of Westminster in London with his car and a knife, killing four and wounding 50. A Muslim blew himself up in the St. Petersburg metro, killing himself and 14 others. A Muslim stole a beer truck in Stockholm and plowed through the downtown area, killing four. Finally, two suspected Muslims planted roadside bombs in Dortmund, Germany in an attempt to murder members of a Borussia Dortmund soccer team. Thankfully, no one was killed.

Presumably all of these attacks have proportional counterparts committed in the name of other faiths, right? No, they don’t. Though Lutherans represent the largest religious group in Sweden, there has never to my knowledge been a Lutheran terrorist attack in that country or any other. Likewise there are no Russian Orthodox suicide bombers. There is no Anglican approximation of ISIS. If the Muslims don’t have a complete monopoly on religious terror, they’re pretty darned close.

Yet terror-deniers never tire of trying to draw some kind of false equivalence between Muslim terrorism and other kinds, no matter how much of a stretch it is. They often deny or downplay Muslim terrorism, or they assume that every white terrorist is both Christian and religiously motivated, or they blame Christians for Muslim terrorism.

This strategy of drawing equivalence where none exists seems to be having some success. A recent CBS News poll found that a full 66% of registered Democrats believed that Islam was no more prone to violence than other religions. Nine percent believed it was actually less prone to violence! These people must believe that every incident of Muslim violence has an equivalent counterpart out there somewhere. The media (which they control, by the way) must be creating misperceptions in the public’s mind by covering up all the violence committed by non-Muslims.

This fallacy of equivalence cannot be the product of rational minds thinking the issue through. What could explain it then? For starters, most Democrats these days are not very religious themselves. The idea that religion in general makes people into violent zealots appeals to them precisely because it strokes their egos and places them above the fray. Another explanation is that Democrats are generally uncomfortable saying that any particular demographic group (except white males) is disproportionately responsible for societal problems. So, for the sake of evenhandedness, they pretend not to see any disparity in dysfunctional behavior among groups. The cliché that “Terror Knows No Religion” sums up this vapid sentiment pretty well.