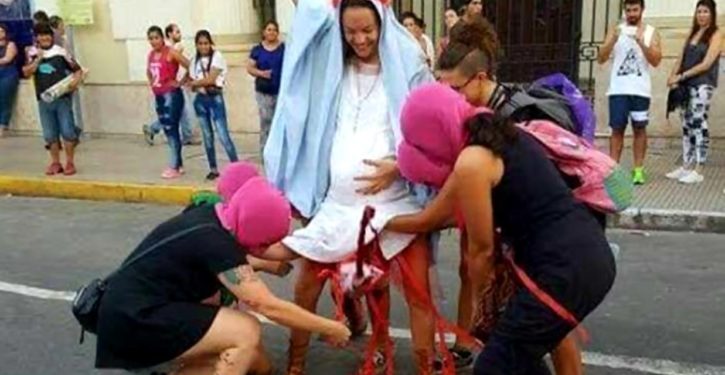 Removing all doubt, at Women's Day protest in Argentina. (Image: Twitter via CNSNews)

[Ed. (J.E.) – Just in case you weren’t clear on who’s behind the grotesquely vile “women’s protest” manifestations of the last few months.]

As part of International Women’s Day (March 8), feminist protestors simulated a bloody abortion on a woman dressed as the Virgin Mary, the mother of Jesus Christ, outside the cathedral in Tucuman, Argentina.

The protestors, according to Life Site News, which reported the incident in the English language press, cheered the fake abortion as symbolically killing “patriarchy” and “forced heterosexuality.” …

In the mock abortion in front of the cathedral, a young woman is wearing a white dress, a blue veil, and a crown of flowers. She is also wearing what appears to be a rosary around her neck.

She is sitting on a chair with her legs spread and several “abortionists” wearing pink “pussy” hats are removing and dismembering a bloody fake baby from her vagina. Fake blood and body parts cover the street.