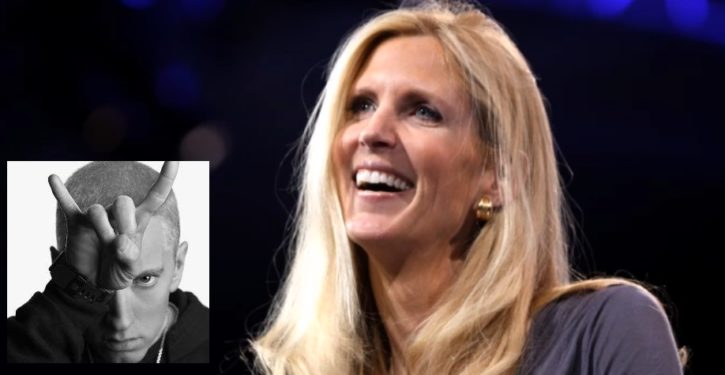 I’m beginning to think that there might be something to this “rape culture” thing that progressives keep talking about. Testifying to its existence is “No Favors,” a recent song by rapper Big Sean featuring Detroit’s most renowned bad boy, Eminem. The track is notable for its grisly lyrics including what sounds like Eminem fantasizing about raping conservative pundit Ann Coulter with various household objects.

And f–k Ann Coulter with a Klan poster
With a lamp post, door handle, shutter
A damn bolt cutter, a sandal, a can opener, a candle, rubber
Piano, a flannel, sucker, some hand soap, butter
A banjo and manhole cover
Hand over the mouth and nose smother
Trample ran over the tramp with the Land Rover
The band, the Lambo, Hummer and Road Runner
Go ham donut, or go Rambo, gotta make an example of her
That’s for Sandra Bland, ho, and Philando.

It’s bad enough that there are people in this world like Eminem, who entertain dark rape fantasies. What’s more disturbing is that the guy who spun these vile lyrics also practiced them for hours before committing them to an audio track that he knew would be heard by millions of people. Worse yet is that no one stopped him — not Big Sean, not the album’s producer, not GOOD Records owner Kanye West, not even the execs at GOOD’s parent company, Universal Music Group.

West and his higher-ups could have tossed that whole track in the garbage if they had wanted to, but they didn’t. It’s not as if musicians have absolute artistic license in the studio. As long as the record company is producing and promoting the final product, performers are little more than glorified employees. So how did “No Favors” ever see the light of day? Eminem’s accomplices must have been at least ambivalent toward, if not supportive of, the heinous lyrics.

Other than a few conservative websites, I don’t know of any media outlet that has made a fuss about Eminem’s ode to sexual violence. Prominent feminist groups don’t seem upset. What’s that thing they always say at their “Take Back the Night” rallies? “Silence is complicity?” Yeah, that’s it.

Are we all pretty blasé about rape now? Hardly. In other contexts — contexts that don’t involve conservative women — our society is actually hypersensitive about rape. That may sound shocking because it implies that there’s such thing as excessive zealotry in the campaign to eradicate rape. Well, guess what? There is. There’s something very wrong with people who throw themselves into fits of hysteria over every accusation, even the false ones, or people who refuse to believe that false accusations even exist. Think of the Duke Lacrosse case, the mattress girl case, the UVA case, the Tawana Brawley case, etc. Calling them “hypersensitive” is the nicest word I can think of.

Given this hypersensitivity, it’s difficult to make the case that our society just doesn’t care about rape. We’re so adamant in our opposition that we’ve sought to eliminate rape at its root — namely, by obliterating “rape culture,” the entire milieu that encourages and excuses sexual violence. This is where things get tricky because we don’t all necessarily agree on what constitutes rape culture. To some people — let’s just call them feminists — rape culture is a term that means anything they don’t like. It’s no coincidence that traditionalism, gender roles, and sexual mores — three things that feminists have been trying to vanquish since at least the 1970s — are now considered key elements of rape culture. If you stick up for these much-maligned concepts you may be called on the carpet for enabling sexual violence. It’s a silencing tactic, and an awfully effective one at that.

The endless search for hidden rape culture has become something of a parlor game in which the person who spots the most rape culture in the most places “wins.” Some people find rape culture in some very unexpected places including the 1944 Christmas duet “Baby, It’s Cold Outside.” The song features a man trying to persuade a woman to snuggle a little longer with him by the fire instead of braving the driving snow outside. It’s not unreasonable to hear a sexual subtext beneath the lyrics though that interpretation requires some reading between the lines. The fact that the female side of the duet seems to want to stay the night and only worries about what people will think of her if she does is not supposed to matter.

“Baby, It’s Cold Outside” stirred up a lot of debate this past December, enough for the reliably liberal website Vox to cover the controversy. Vox quoted Stephen Deusner of Salon calling the Christmas classic “a date rape anthem.”

As far as I can tell “Baby, It’s Cold Outside” has sparked more controversy than “No Favors.” Neither Vox nor Salon has, to my knowledge, covered the “No Favors” controversy, which is probably because a controversy is not a controversy until the media decide to cover it. When the media shrug off actual episodes of blatant, undeniable rape culture, we tend not to be aware of their existence.

And that’s where we are today — a man asking his date to stay a little longer by the fire generates more headlines than a man who wants to “make an example” out of a woman by penetrating her with various household objects. I wonder why that might be? I can think of several reasons. There’s the fact that “Baby, It’s Cold Outside” is an old song that harkens back to an era that liberals love to hate. There’s also the fact that “Baby, It’s Cold Outside” is about an anonymous woman whereas “No Favors” is about Ann Coulter — and raping her isn’t really such a big deal, is it?

Not to people who matter — media figures, music moguls, and the like. That’s why I say that rape culture is very real, though generally concentrated in liberal enclaves. That does not mean that red-state America is some kind of rape-free paradise. What it does mean is that wherever the Left’s values dominate there is bound to be a winking, nodding acceptance of casual rape talk aimed at conservative women.

Don’t believe me? I’ll provide two examples though there are certainly more.

Two celebrities of at least some note independently expressed their desire to see former Governor Sarah Palin gang-raped by black men. In 2008, the very unfunny comedienne Sandra Bernhard said that Palin would be “gang-raped” by “big, black brothers” if she set foot in Manhattan. Bernhard clearly relished the thought, probably because she is a homosexual and frustrated that she can’t get Sarah Palin in the sack.

More recently, female rapper Azealia Banks tweeted that she wanted to see Palin raped by “some of the biggest, burliest, blackest Negroes.” Banks, by the way, is also a homosexual and probably as mad as a wet cat that she isn’t Palin’s type. In another tweet, Banks stated: “Sarah Palin needs to have her hair shaved off to a buzz cut, get headf — cked by a big veiny, ashy, black c — k then be locked in a cupboard.” At the time, Banks was upset with Palin because of some Fake News™ she’d read concerning the former Alaska governor’s take on slavery. A fabricated quote attributed to Palin was “Even the French understand that slavery wasn’t our fault because the Negroes liked it.” Palin never said that, of course, but because Azealia Banks is paranoid about racism and because her IQ is lower than whale dung, she found the quote credible. Then she wished rape upon another woman.

“In my honest defense, I was completely kidding,” Banks later wrote. “I happen to have a really crass, New-York-City sense of humor, and regularly make silly jokes in attempts [to] make light of situations which make me uncomfortable.”

Yeah! So chill. It was just a “silly joke.” It’s a New York thing, you wouldn’t understand.

And I almost believe her. Palin is despised in New York City, just as she is despised in most urban centers. If I went to Azealia Banks’s hellhole neighborhood and started cracking jokes about Sarah Palin being raped, would anyone stop me? How many would egg me on? Plenty, I’d wager.

It’s hard to deny that America has a conflicted, almost schizophrenic attitude toward rape. This attitude may not be on display in the sleepy, conservative towns where most conservatives live, but it certainly exists on college campuses, in big cities, and in the entertainment industry. On the one hand, people fall all over each other to condemn alleged rapes as swiftly and severely as possible, often not caring if a particular accusation is even true. And on the other hand, people don’t really care about the obvious glorification of rape as an instrument of revenge when the object happens to be conservative woman. 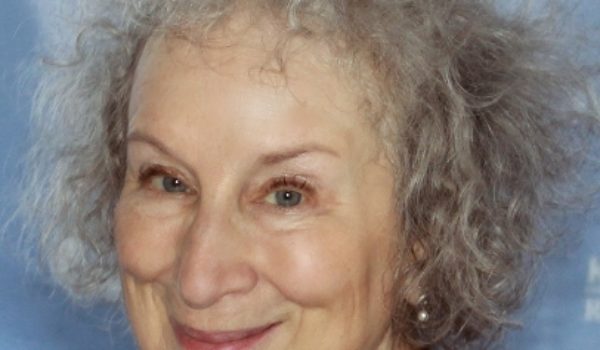