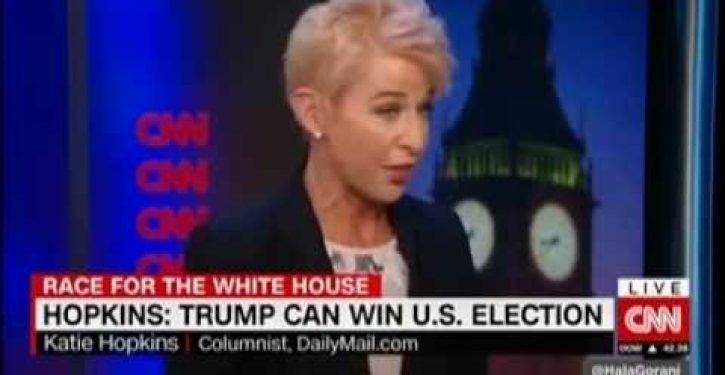 It’s too bad it took a Brit to tell the truth about the cozy relationship between the American media and the Clintons. When Daily Mail opinion columnist Katie Hopkins appeared on CNN last week she deftly dropped the “Clinton News Network” epithet on her host, Hala Gorani. It really was quite delicious.

In response to a question about whether Trump could win, Hopkins replied:

I think he’s gonna win. I think you guys are in for a big surprise, which I’m quite excited about. I think we’ve seen a very similar thing here in the UK with Brexit. We saw a lot of the liberal press kind of sneering at Brexiteers. We saw a lot of the sneering that we see from the Clinton News Network and I think it’s something—

At this point, Hala Gorani interrupted:

Hopkins landed a clean shot on CNN’s jaw. Good for her. She is probably wrong about Trump’s chances, but she was right to say that CNN is nothing but a front for Clinton, Inc. Hala Gorani’s protests to the contrary came off as desperate, as if running a poll showing Trump leading in one state somehow proves that CNN is beholden to no one.

If my memory serves me correctly, the term “Clinton News Network” dates back to the first Clinton presidency, which is to say about twenty years. As the name suggests, the world’s first 24-hour news network does not merely bend to the Democratic left — which is basically a given — but also that it’s specifically Clintonian. CNN oldtimer Larry King let that secret slip 24 years ago when he was caught on a hot mic sucking up to then-Governor Bill Clinton during the 1992 campaign. King slyly admitted that Ted Turner, who owned CNN at the time, would “serve” Clinton. It’s hard to imagine that he meant anything other than that Turner would be willing to put the massive influence of his network, which then had a monopoly on cable news, at Clinton’s disposal.

Larry King: Ted Turner changed the world. Big fan of yours, you know?

Bill Clinton: Is he?

King: He would, uh, serve you. You know what I mean?

King: Oh you’d be surprised. He’s [inaudible]. What’s he got left in life to gain? I’d call him after you’re elected. Think about it.

Clinton: That’s for sure.

I’m sure Hillary’s fan club would use the same old tactics they always use to deny the validity of that very candid moment — “It’s old news!” “That was Bill, not Hillary!” “Out of context!” and blah, blah, blah. But when it comes to the love affair between the Clintons and their network, some things never change.

When the Hillary Clinton campaign hosted an “off the record” cocktail party at the Manhattan home of a prominent donor they invited “influential reporters, anchors and editors.” The purpose of the event was to coordinate directly with the media to get their message out and to gin up excitement about Mrs. Clinton’s candidacy. It was an egregious example of media players violating the professional distance they should maintain from the candidates they cover. Among the 38 who RSVP’ed were nine from CNN — more than from any other news outlet. CNN President Jeff Zucker apparently declined his invitation, though he never mentioned publicly that this highly unprofessional schmooze-fest took place and there’s no indication that he disciplined any of his nine unethical employees. The fact that they still have jobs indicates his tacit approval.

The Clinton News Network also employed Donna Brazile, the Democratic strategist and Clinton loyalist who was until very recently a regular contributor to several CNN programs. She was fired in October after WikiLeaks emails revealed that she fed at least two questions to Clinton in advance of a debate or debates that took place during the Democratic primaries. In Brazile’s email she admits that “from time to time” she “get[s] questions in advance,” which indicates that she’s done this before. One question involved the death penalty and another was a wiffleball about lead-contaminated water in Flint, Mich. This wasn’t a case of CNN merely preferring Democrats over Republicans. This was an example of CNN rigging the game to boost a candidate named Clinton above even fellow Democrats.

Naturally, CNN has denied any wrongdoing. “CNN never gave Brazile access to any questions, prep material, attendee list, background information or meetings in advance of a town hall or debate,” pronounced a network spokeswoman. The truth of the matter is more complicated. Obviously someone at the network leaked the questions, but who? According to Brazile’s own email, her source for at least one of the unknown total number of questions is Roland Martin, who has worked with but not for CNN. Martin reportedly received it from CNN’s Jake Tapper. To say that Brazile did not receive any access to questions may be a premature conclusion in light of the fact that no one knows how many questions she’s received over the years. In any case, her indirect access highlights serious ethical shortcomings at CNN.

But CNN’s main contribution to this year’s Clinton campaign has not been in leaking debate questions or making a spectacle out of Donald Trump’s antics. Their primary utility has been in squashing stories — in other words, by doing exactly the opposite of what a free press is supposed to do. Think of CNN as a fire brigade that runs around putting out fires for their favorite candidate. Wherever there’s a story that could potentially harm Hillary’s electoral chances CNN is there to suffocate it with speed and ferocity.

My favorite example of this was CNN’s desperate efforts to spin discussion of Mrs. Clinton’s ailing health as mere “conspiracy theories.” She’s fit as a fiddle! “The new birthers: Debunking the Hillary Clinton health conspiracy” blared a piece from August. Wherever would these conspiracy theorists get the idea that Mrs. Clinton is unwell? Maybe it’s because she can’t climb a few stairs and she hacks like an old barmaid.

When Hillary was interviewed by the FBI about her email server she pleaded ignorance again and again, claiming that her memory hadn’t been the same since she suffered a concussion in 2012. She was probably lying about not being able to remember, of course, but she did faint at her home and hit her head. If she’s so healthy, why is she always stumbling and falling down? The article continued:

Clinton’s physician  —  the only person to speak on the record who has actually examined her  —  has repeatedly affirmed the former secretary of state’s health and fitness for the highest office in the land.

Sure — but that means nothing because Hillary Clinton would never employ a doctor who wouldn’t lie for her.

As it turned out, Hillary was (or is) sick — only the diagnosis is unknown. She was forced to admit it after collapsing in New York in early September. Even then Clinton refused to go the hospital in hopes that she might be able to continue the charade. She now claims that she was fighting walking pneumonia. Maybe she was or maybe she’s been struggling with a more permanent medical condition, but in either case her doctor is a liar. Can I blame CNN for that? Yes, I can. A denial from Clinton’s surrogate is nothing more than a denial from Clinton herself and no journalist should take it at face value. But that’s how CNN operates — they consider any charge to be “debunked” once it’s been denied by their preferred candidate. If you don’t believe her, you’re a “conspiracy theorist.” That’s not journalism, it’s public relations.

It took CNN years of hard work to earn the title “Clinton News Network.” It isn’t easy being the lackey of the world’s most powerful couple. People start asking embarrassing questions like “Why are so many of your reporters at secret meetings with Clinton?” and “How the heck did Clinton know the debate questions in advance?” Then network spokespeople have to scramble to cover CNN’s bare backside. It’s almost enough to make me feel sorry for them. Almost.

Cartoon bonus: Honest Hillary
Next Post
Clinton server hacked not by 1, not by 2, but by 5 (count ‘em) foreign intel agencies