How it must have pained Marine Corps General John Paxton to tell Congress that his service might not be prepared for war. Last week, the Assistant Commandant candidly admitted to the Senate Armed Services Committee that the U.S. Marine Corps isn’t what it used to be. “I worry about the capability and the capacity to win in a major fight somewhere else right now,” said the general. He fretted over inadequate training and equipment particularly in the fields of communications, intelligence, and aviation.

Cynics might see Paxton’s testimony as a plea for more money, a quantity that isn’t usually forthcoming when no obvious shortcomings can be identified. Yet this rebuttal strikes me as an out-of-hand dismissal of Paxton’s concerns. It would also be uncharacteristic of the Marines, undoubtedly the proudest of the services, to denigrate themselves if it weren’t true. When a senior Marine officer describes the Corps as borderline dysfunctional, I believe him.

Nor is the Marine Corps alone in its negative self-assessment. Army Chief of Staff Mark Milley told Congress that his branch is prepared to do battle with ISIS — and no other potential adversary. The U.S. would probably lose a war with China, according to General Milley. Or with Russia, North Korea, or Iran. According to an Associated Press article: “Mark Milley says years of combat in Iraq and Afghanistan, constrained budgets and troop cuts have had a cumulative effect on the service.” Essentially, our military is capable of defeating the guys Obama described as the JV team but not a conventional force of any heft. Pathetic.

How’s the Air Force faring? If recent trends are any indicator, it may soon be incapable of fulfilling its raison d’être — air superiority. It’s been a very long time since America has gone to war without first asserting absolute dominion over the sky. Air superiority will probably be more difficult to establish in coming years as other nations, particularly China and Russia, fortify their air defenses with new technologies while we continue to fly 1970’s-era F-15s and F-16s as our primary fighters.

Air Force General Frank Gorenc, who commands NATO Allied Air Command, U.S. Air Forces Europe and U.S. Air Forces Africa, is not confident that U.S. forces will be able to achieve and maintain air superiority in future conflicts. “The advantage that we had from the air, I can honestly say, is shrinking…. This is not just a Pacific problem. It’s as significant in Europe as it is anywhere else on the planet…. I don’t think it’s controversial to say [Russia has] closed the gap in capability.”

I don’t believe that any of these generals — Paxton, Milley, or Gorenc — takes pride in admitting this sorry state of affairs because it is essentially an admission of failure. Duty nonetheless dictates that they tell it like it is. They’re playing with the hand they were dealt and I doubt anyone else could do it better.

It doesn’t help that their commander-in-chief pretends not to hear what they’re saying. Just two months ago, President Obama delivered a State of the Union address in which he pooh-poohed the very idea that our armed forces are languishing in disrepair. Said Obama:

I told you earlier all the talk of America’s economic decline is political hot air. Well, so is all the rhetoric you hear about our enemies getting stronger and America getting weaker. The United States of America is the most powerful nation on Earth. Period. It’s not even close. We spend more on our military than the next eight nations combined. [Emphasis added]

What a dolt. Surely he can’t believe that our military’s combat effectiveness can be measured in dollars spent? The measure of any endeavor is always results. His argument reminds me that, once upon a time, Obama was just a left-wing community activist. He still sounds like one.

Didn’t President Obama consult his top military leaders before including that remark in his speech? If he had they would have told him what they told Congress last week — namely, that the military is woefully unprepared. If we rule out the possibility that he’s never had such a conversation with the brass then we must conclude that he flippantly dismissed what they told him, probably with the same nifty factoid about military expenditures that he used at the State of the Union. Obama clearly didn’t listen to his advisors because they told him something he didn’t want to hear.

Or is there another possibility? Could it be that this president knows quite well how much the military has atrophied under his administration and he’s pleased with it? In order to prove such a claim definitively I would have to get into his mind to determine his true motives, which I obviously can’t do. There’s nothing in his public statements to indicate a hostility toward the military, though there’s enough anecdotal evidence to indicate a casual disrespect, such as his now infamous latte salute and the completely unreasonable rules of engagement he imposed on combat troops in Iraq and Afghanistan. This is a man with no military experience and it shows.

He’s also the president who opened all combat positions to women. That alone would have been a mistake, but of course his administration exerted downward pressure to get women into elite units such as the Army Rangers without actually requiring them to meet standards. After two women “passed” the Ranger course this summer, it came to light that they had received special assistance and unlimited opportunities to reattempt portions of the course that they had failed. “We were under huge pressure to comply,” said one Ranger instructor. “It was very much politicized.”

It seems that Obama likes the military only as a production line for historic “firsts” that he can take credit for. He’s the guy who gave us the first two female Rangers and the first openly homosexual service secretary, Eric K. Fanning. Just last week Obama nominated another “first” — the first female combatant commander, Air Force General Lori Robinson. I’m not necessarily saying that General Robinson is unqualified for the job though the fact that she was nominated by Obama, a man of unspeakably poor judgment, suggests that she’s probably a hot mess. I am however saying that if she’s truly the best candidate for the job then her sex shouldn’t matter. But to Barack Obama, it matters quite a bit because her nomination provided another “first” for his presidential legacy. Isn’t that what the military is for?

If you want to know what Barack Obama thinks about the military, look to the man he claimed as a mentor in his first memoir “Dreams From My Father” — Frank Marshall Davis, a card-carrying member of the Communist Party. Davis first became a member of the CPUSA during the Stalin era, as well as during the time of the Comintern when all communist parties around the globe met periodically in Moscow to receive their marching orders. Davis was a determined opponent of U.S. foreign policy, especially the Marshall Plan and NATO, and he hated the U.S. military which he saw as a global force for evil. To believe that the president doesn’t share even a hint of this hostility toward our armed forces is to say that Barack the protégé learned nothing from Frank the mentor, a conclusion I find plainly absurd.

If that doesn’t convince you, look at some of his other influences, such as his pastor, the anti-American firebrand Jeremiah Wright, as well as his heroes Saul Alinsky, Desmond Tutu, and the communist terrorist Nelson Mandela. Obama has always admired people who hate U.S. military power but we’re supposed to believe that he doesn’t.

Our military has fallen on tough times, and it will be up to the next president to rehabilitate it. Whether the harm that has befallen our military is the result of mere neglect or actual malfeasance is difficult to determine though I wouldn’t rule out the latter.

Trump rolls in Arizona, Cruz in Idaho; Cruz and Sanders up early in Utah
Next Post
Frustrated AP reporter storms out of State Dept. briefing when he can’t get straight answer 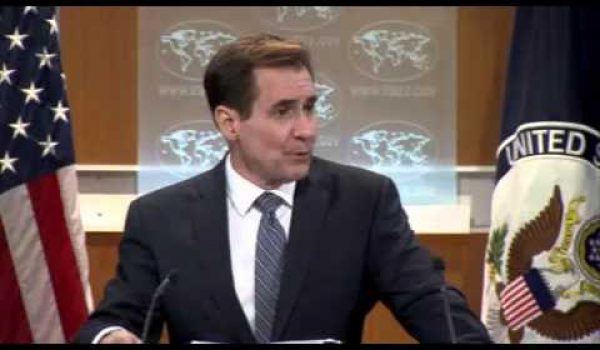