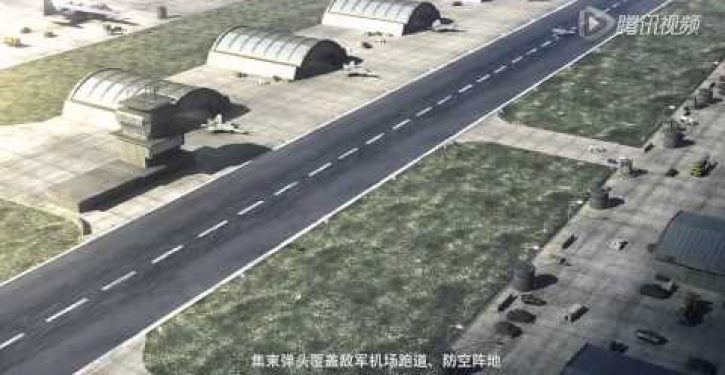 China made several pointed “statements” last week in conjunction with the victory parade in Beijing commemorating the 70th anniversary of the end of World War II.

One was the concurrent deployment of a naval task force into the Bering Sea, off the coast of Alaska.  That deployment also coincided with Obama’s visit to Alaska – a rarity for a U.S. president.

Another, however, was the publication of a war-game-type CGI video in which Chinese forces launch a counterattack after a Chinese base has been attacked.  The counterattack goes after an enemy carrier battle group that looks like a group of U.S. Navy warships (including a Nimitz-class carrier).  Chinese forces also conduct an amphibious assault on a Pacific island base that bears more than a passing resemblance to a U.S. facility on Okinawa.

Foxtrot Alpha has a nice sequential breakdown of the video action – which includes a depiction of the dreaded DF-21D “carrier killer” ballistic missile finding its target: overwhelming the Aegis ships that would defend the carrier against such a threat, and conveying the message that the Americans are, shall we say, over-confident about their ability to evade the smart-maneuvering missiles.

There are a few comments to add, however.  One, the Type 071 amphibious ship we see in the video, launching landing craft for a shore assault, is our pal Changbaishan, the ship that was part of the naval task force that went to the Bering Sea.  China has big plans for the Type-071 class assault ships, and clearly likes to send the hulls around — and depict them in action poses — to make sure we don’t miss the point.

Two:  there’s been discussion of who was behind the video, which was put out by the Chinese media company Tencent.  We can take it to the bank that Tencent wouldn’t have put the video online without the approval of the Chinese government.  It depicts Chinese weapons platforms in accurate detail, for one thing, and shows them being used in combat, apparently in a doctrinal manner.

But a couple of other factors should color our understanding of the video’s provenance.  Tencent is not just a media conglomerate; in China, it’s the media conglomerate, operating an instant messaging service, QQ, with a titanic subscription base of nearly 830 million users (at last count).  And Tencent is known to cooperate fully with Chinese authorities on touchy things like government monitoring of social media.

Tencent’s CEO, Ma Huateng (who goes in the tech world by the nickname “Pony” Ma), keeps his relationship with the Communist authorities nicely free of daylight:

Ma is a savvy businessman who knows he must play the political game as much as his government demands. When a reporter asked him about censorship at a tech conference in Singapore, he gave a reply that would have pleased China’s most conservative of censors: “Lots of people think they can speak out and that they can be irresponsible. I think that’s wrong,” Ma said. “There should be order if the development of the cyberworld is to be sustainable.” Last year, Ma was appointed a deputy to the National People’s Congress, China’s obedient parliament.

So we needn’t wonder very much whether the government of China had a cut on the nature or timing of this video.

There’s another aspect of the video that bears analysis.  Tencent has charged into gaming over the last few years, buying up stakes and investing in the most prominent of foreign gaming companies.  Tencent Holdings Ltd. has accrued a formidable position with key holdings in Riot Games (League of Legends) and Activision Blizzard (Call of Duty, World of Warcraft), among others – in other words, the designers of the most popular war/conflict games on the planet.  In fact, Tencent has had the majority stake in Riot Games since 2011, and is said to take a hands-on approach.

So it’s interesting that the CGI in the “victory” video is in some ways kind of laughable.  It’s less than state-of-the-art, and even clunky or silly in some spots.  (A number of commentators have noticed the Chinese tank bouncing along during the amphibious assault, flying through the air, squeezing off rounds right when it hits the ground as if coasting on a magic carpet ride.  Mobile missile launchers appear to do something similar.  Physics-defying terrain-skimming seems to be a design capability of China’s land-mobile weapon systems, if we go by this video.)

Tencent has the resources, and would seem to have the commercial motivation, to put out a higher-quality product – one that would be more credible to experienced gamers.  But instead, it put out a product that looks doctrinally exact from a military standpoint (if simplistic), but relatively unsophisticated as CGI art.  That seems to argue more input from government editors than from game-industry CGI designers.*

Tit for tat in leveraging the Law of the Sea?  NO

One other feature of China’s paroxysm of strategic communication last week bears mentioning.  After the Pentagon’s initial statement about the Chinese task group in the Bering Sea, military spokesmen followed up with information on the path taken by the task group.

As suspected (see my first post; link at the top), the Chinese proceeded to the Bering Sea from off the coast of Russia.  According to the Pentagon, the naval task group entered the Bering Sea by passing between Russia’s Kamchatka Peninsula and the Alaskan island of Attu.  But when it departed the Bering Sea, it did so by passing between islands in the U.S. Aleutian chain, coming closer than 12 nautical miles to U.S. territory.  (The waters out to 12 nautical miles are designated by the Law of the Sea as a nation’s territorial sea, and foreign warships are expected to respect that as a standoff distance.)

Doing what the Chinese did is an approved convention in international maritime operations, and is called exercising the “right of innocent passage.”  It requires no prior notification to the littoral nation.  Certain limitations apply to what the warships are allowed to do while they are transiting the archipelagic nation’s territorial sea, and according to the positive report of the Pentagon, it sounds like the Chinese observed those limitations.

But a theme seems to be getting started that in exercising “innocent passage” through the Aleutians, the Chinese have now done what the U.S. has done several times in the last decade off the coast of southern China, as an exercise of freedom of navigation.

The Wall Street Journal states the case in these terms:

The Chinese don’t always acknowledge those laws [i.e., Law of the Sea conventions], however, according to U.S. defense reports. For example, Beijing claims that U.S. warships should request permission before making their own “innocent passage” in Chinese territorial waters.

And that’s not accurate.  The U.S. exercise of freedom of navigation in waters near China has actually involved operating in waters where China makes excessive claims: waters that don’t meet the Law of the Sea definition of Chinese territorial waters.  Operating near the disputed islands in the South China Sea, for example, doesn’t constitute operating in Chinese territorial waters.

A particularly good example is transiting between Taiwan and the coast of mainland China, which can be done without entering the 12-nautical-mile territorial sea limit.  The U.S. Navy has done this on a number of occasions.  Passage through the Taiwan Strait is not an exercise of “innocent passage” – and wouldn’t be even if Taiwan were recognized as a province of China.  The distance across the strait is more than 24 nautical miles (at the narrowest point, it’s 70 nautical miles).  Making the passage is a transit of international waters.

China disputes this, and wants a special regime by which the transit would be treated as something more “intrusive” than an exercise of innocent passage.  Beijing wants to demand prior notice from ships of their intent to pass through the Taiwan Strait – in effect, China wants to hold a pocket veto over such transits – even though it can be transited without entry into China’s recognized territorial sea.

That, like China’s claims to much of the South China Sea, is an excessive maritime claim.  It’s not recognized by the other parties to the Law of the Sea Convention, and it doesn’t meet the convention’s criteria for such maritime claims.

Although this may seems arcane, it’s important to understand that in transiting the Aleutians a few days ago, China merely observed the accepted conventions of international maritime law.  And that was good enough for the United States, which doesn’t ask for anything more.  It’s also consonant with the Chinese navy’s behavior in, say, the Strait of Hormuz, or transiting the Aegean Sea, where the Chinese have observed international conventions.

But what Beijing demands off China’s own coast is obedience to her excessive claims.  China didn’t make any positive naval gesture in the Bering Sea – no demonstration that means her posture on her excessive claims is going to change.  China hasn’t done anything the U.S. needs to respond to with applause or anticipation.

China should observe international conventions abroad, as everyone else does, and also stop trying to enforce excessive maritime claims in the South China Sea and Taiwan Strait.

The series of demonstrations last week indicates, however, that that’s not what China is going to do.

* “Shanghaiist” noted that the victory video reminded him of Chinese news reporting from a couple of months ago, which ostentatiously showed Chinese troops practicing an attack on an exact replica of the presidential palace in Taiwan.  Beijing hasn’t been shy of late about publicly depicting Chinese forces mounting military attacks in the region.

Denmark runs ads in Lebanese media: Refugees not welcome
Next Post
We don’t need Kim Davis to be in jail