n January 20, 2009, when Barack Obama assumed the presidency, the overwhelming majority of African-Americans cheered and prayed for him. His inauguration was a signal moment in black history, reminiscent of the celebrations that accompanied the Emancipation Proclamation, Joe Louis’ victory over Max Schmeling and the March on Washington. Irma Brown-Williams traveled to the inauguration from Tuskegee, Alabama, wearing a coat on which she had pinned photos of her mother, father and siblings, all of whom were deceased. Asked to explain, she said, “I’m here for them. … They could not be here, so I brought them with me.” Against the backdrop of such exhilaration and triumphalism, an emotional downturn was inescapable. It has come to pass. For many, the passion has cooled. For some, the thrill is gone.

Obama swept into office with a reputation as an intellectual politician with vision. Part of the reason had to do with his memoir, Dreams from My Father, his campaign book, The Audacity of Hope, and a March 18, 2008, address, “A More Perfect Union,” in which he explained his relationship with the Rev. Jeremiah Wright, the Chicago preacher who had denounced the status quo in memorably inflammatory fashion: “God Damn America!”

The speech was immediately celebrated, with some likening it to Abraham Lincoln’s Gettysburg Address or Martin Luther King Jr.’s “I Have a Dream” speech. These gushings were a vivid symptom of Obamamania. For in fact “A More Perfect Union” is not a speech for the ages; it was simply a tactical intervention aimed at quelling whites’ discomfort about Obama’s long association with a radical, left-wing minister. In neither its rhetoric nor its analysis nor its prescriptions did the speech offer anything beyond a carefully calibrated effort to defuse a public relations crisis. “In the end,” Obama declared, “what is called for is nothing more, and nothing less than … that we do unto others as we would have them do unto us. Let us be our brother’s keeper. … Let us be our sister’s keeper. Let us find that common stake we all have in one another, and let our politics reflect that spirit as well.” Fine banalities that could have been voiced just as easily by Mitch McConnell. 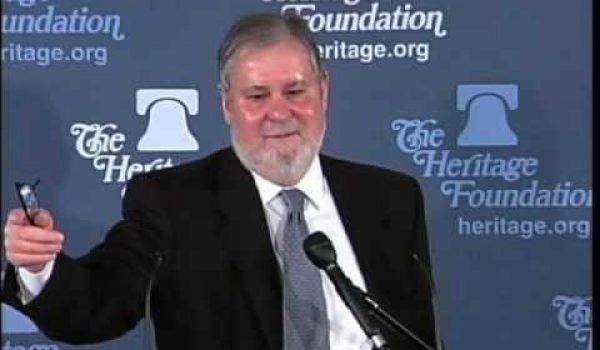