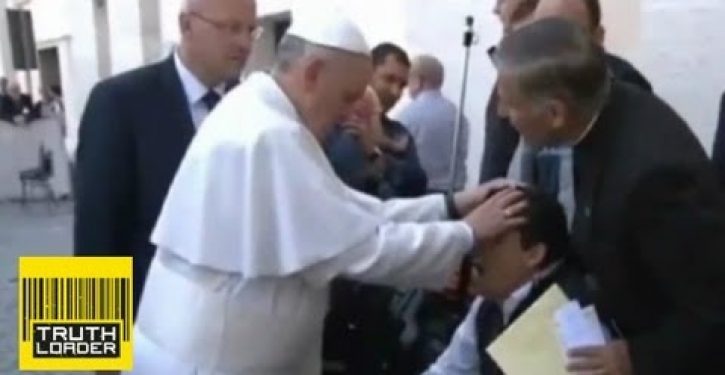 The claim that demons possess people and need to be exorcised hasn’t ever really been renounced by any popes that I know of, but it’s such embarrassingly obvious bullsh*** that recent decades have seen exorcists getting marginalized. (Arguably, they could have been wiped out completely if not for the book and movie The Exorcist, which painted exorcists like child-saving heroes instead of the dangerously delusional idiots they are.) Pope Francis is apparently reversing that trend and instead blowing kisses at the nutters who think demon possession is a thing that happens and that exorcism is a way to deal with it.

Largely under the radar, theologians and Vatican insiders say, Francis has not only dwelled far more on Satan in sermons and speeches than his recent predecessors have, but also sought to rekindle the Devil’s image as a supernatural entity with the forces­ of evil at his beck and call.

Last year, for instance, Francis laid hands on a man in a wheelchair who claimed to be possessed by demons, in what many saw as an impromptu act of cleansing. A few months later, he praised a group long viewed by some as the crazy uncles of the Roman Catholic Church — the International Association of Exorcists — for “helping people who suffer and are in need of liberation.”

The piece has an amazing bit of color, when [WaPo writer Anthony] Faiola actually talks to some exorcists. …

During the conference, the Rev. Cesar Truqui, an exorcist based in Switzerland, recounted one experience he had aboard a Swissair flight. “Two lesbians,” he said, had sat behind him on the plane. Soon afterward, he said, he felt Satan’s presence. As he silently sought to repel the evil spirit through prayer, one of the women, he said, began growling demonically and threw chocolates at his head.

Asked how he knew the woman was possessed, he said that “once you hear a Satanic growl, you never forget it. It’s like smelling Margherita pizza for the first time. It’s something you never forget.”

Okay, I have to admit that I would have paid a lot of money to see that interaction. I am fans of these lesbians that he encountered. If some asshole determines that you’re a sinner and starts praying pointedly at you, growling and throwing chocolates is an excellent way to respond.