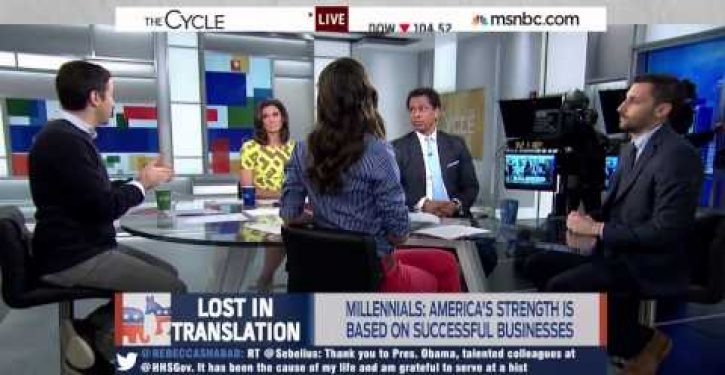 “You can’t ban racism for life. And it’s endemic in our culture. No matter how many times we say we’re gonna have a conversation about race, we never have that conversation.”

Such low-hanging fruit was too much to bear for the folks at Digitas Daily, who’ve produced a quasi-definitive MSNBC “conversations on race” super-cut.  Enjoy:

It’s tough to pick favorites among the non-news network’s myriad colloquies on racial issues, though the most nuanced ones often involve fast-talking race hustler Michael Eric Dyson.  Who could forget his thoughtful “Jewish Nazi collaborator” analysis of Clarence Thomas’ Voting Rights Act decision?  Or the time he dropped the “white privilege” bomb on a conservative guest who dared to challenge his race-baiting?  Memories.  Here’s the funnest fact about MSNBC-approved “conversations on race:” The act of engaging in them makes one high susceptible to — ta-da! –charges of racism. Those who call most loudly for these discussions are often first up in the queue to denounce people for their unapproved attitudes.*  Knee-jerk racial demagoguery is most frequently directed at conservatives, but when there’s an overriding agenda at stake, no one is safe.

Tweet of the Day: Boehner to form select committee on Benghazi … finally
Next Post
Parents begin hormone therapy on their 9-year-old ‘transgender’ son