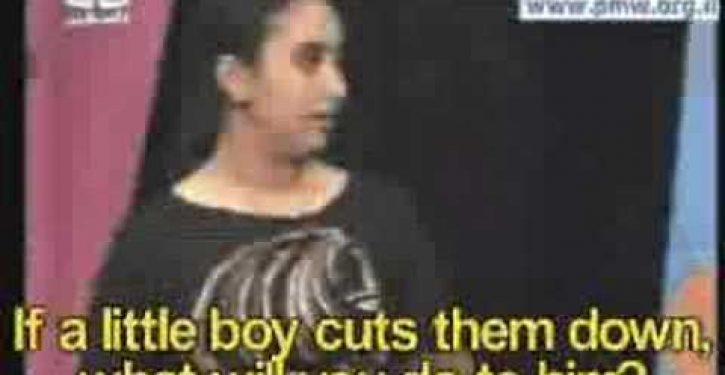 They Weren’t wearing swastika armbands or chanting “Sieg Heil!”during the Islamic Jihad rally this month on the campus of Al-Quds University. They didn’t need to. Everything about the event reeked of fascism and anti-Semitic bloodlust. Demonstrators at the Palestinian school paraded in paramilitary gear, with massed black flags, mock assault weapons, and arms extended in Nazi-style salutes. There were banners lionizing suicide bombers, and hand-drawn Israeli flags on which students trod. Islamic Jihad — long identified as a terrorist organization by the United States and the European Union — posted photos of the rally on its website. In one, students representing dead Israelis sprawl on the ground as black-clad jihadists brandishing weapons stride past.

Such celebrations of terrorism and incitement to violence are pervasive in Palestinian society. Children raised under the Palestinian Authority are indoctrinated from an early age to regard Israelis and Jews as enemies to be destroyed and infidels to be loathed. Nothing about the nearly three-hour rally at Al-Quds would likely have surprised the estimated 1,000 students who saw it. Most of them have been fed a steady diet of such poison all their lives, and not just in schools and mosques. From TV shows and popular music to the naming of sports clubs and public squares, the next generation of Palestinians has grown up amid the most violent culture of Jew-hatred since the Third Reich.

Senators weigh new sanctions on Iran as Obama eases old ones
Next Post
Iran nuclear deal: The good, the bad, and the ugly