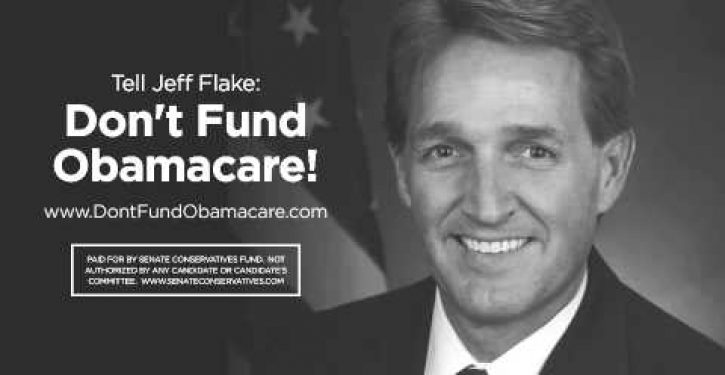 In 2012, then-senator and chairman of the Senate Conservatives Fund Jim DeMint endorsed Jeff Flake in the Arizona Senate race. “Jeff Flake is one of the strongest conservative leaders in Congress,” declared DeMint. “[N]obody has done more to advance the cause of freedom than Jeff Flake. Nobody.”

But a little over a year since DeMint heaped effusive praise on Flake, the Arizona senator finds himself the subject of attack ads run by the Senate Conservatives Fund. “Republicans in Congress can stop Obamacare by simply refusing to fund it, but Senator Jeff Flake is nowhere to be found,” declared one radio ad. “Jeff Flake won’t stand up to President Obama.”

The intraparty Republican squabbling over the campaign to defund Obamacare has been portrayed by many in the press as a fight between “Republican establishment” and the “conservative grassroots.” But the rift between Flake and the Senate Conservatives Fund shows that’s not quite right.