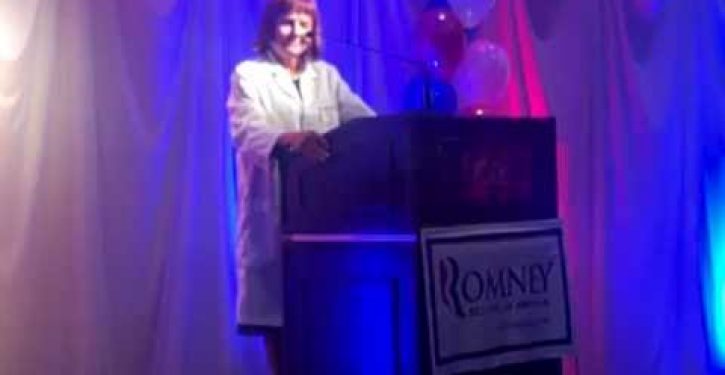 Dr. Barbara Bellar, a former nun and Army Major, told Fox News’ Greta van Susteren on Friday that she lost her job at Metro South Medical Center in Blue Island, Ill., for opposing Obamacare, despite having an excellent record.

Dr. Bellar ran for the state Senate this year, running as an ardent opponent of Obamacare.   Speaking at a Romney event, she accurately described Obamacare in one lengthy sentence.  The video of that sentence went viral on YouTube, receiving well over three million views.

“We’re going to be gifted with a health care plan we are forced to purchase and fined if we don’t, which purportedly covers ten million more people without adding a single new doctor but provides for 16,000 new IRS agents, written by a committee whose chairman says he doesn’t understand it, passed by a Congress that didn’t read it but exempted themselves from it, and signed by a president who smokes, with funding administered by a treasury chief who didn’t pay his taxes, for which we will be taxed for four years before any benefits will take affect by a government which has already bankrupted Social Security and Medicare, all to be overseen by a surgeon general who is obese and financed by a country that is broke,” she said in August.

But the hospital decided not to renew her contract,  and in her words, did not give her an adequate explanation.

Hospital administrators met with her, but refused to let her include an attorney.

“I firmly believe and I am of the opinion that failure to renew my contract is a direct result of my being an opponent of Obamacare,” she told van Susteren.

When asked if the hospital objected to her political campaign, she said “they never clarified either way,” but said she was told the hospital would love to have a state senator on staff.

Dr. Bellar also told van Susteren that Republicans need to quit being “spineless” or ashamed of their conservative values.

The issue is not likely to go away any time soon.  Dr. Bellar did not rule out legal action, saying that “there are more things to be said on this matter.”

Bill Maher uses story of man who killed himself over Obama win as punchline for crass joke
Next Post
Dead child in Egyptian prime minister’s arms killed by Hamas, not Israel